A Marion County Sheriff's Office deputy can be seen repeatedly punching a local transient during an arrest Monday in Detroit, Oregon. 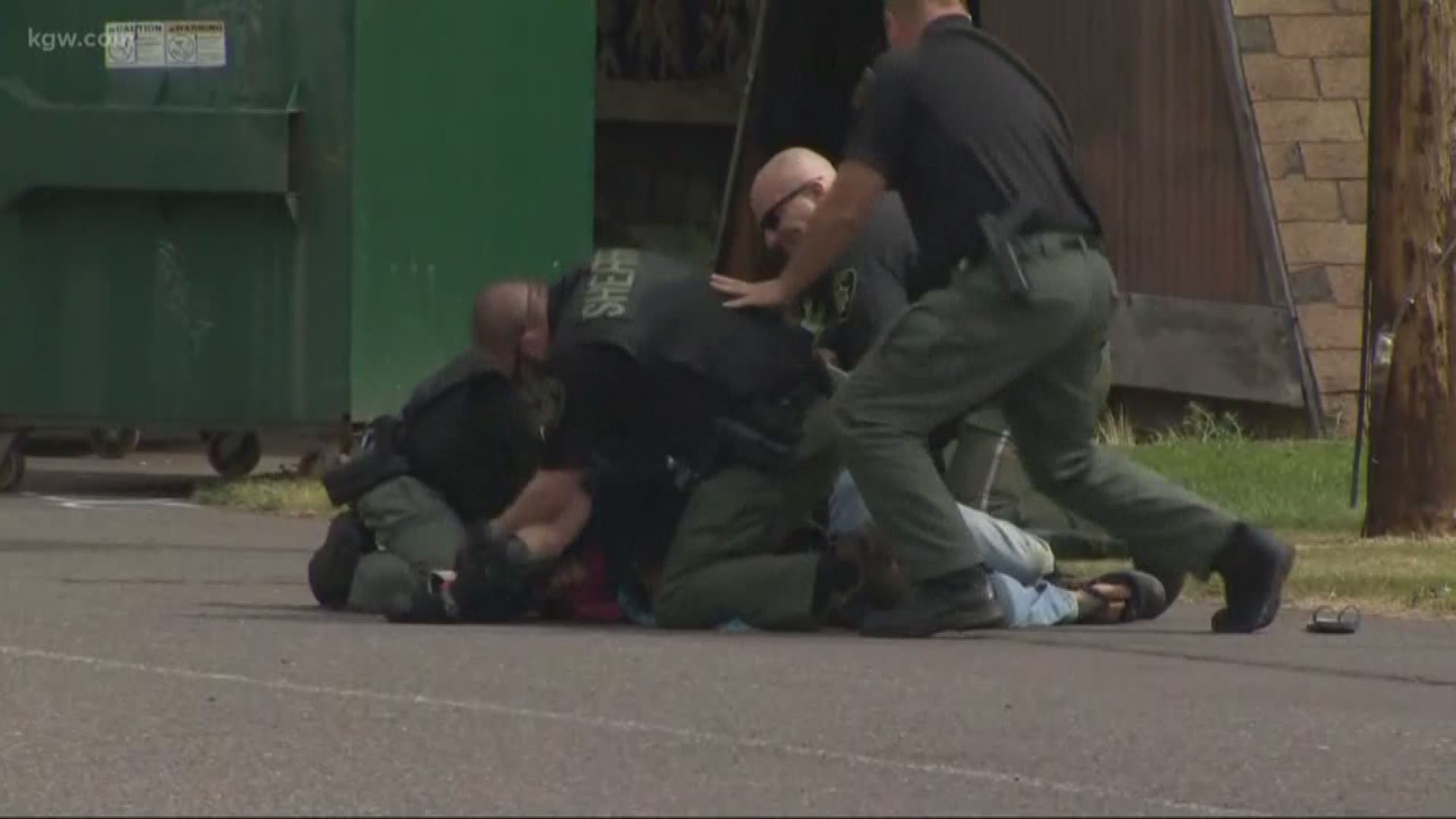 DETROIT, Ore. — A sheriff's deputy seen repeatedly punching a local transient during an arrest Monday morning has been temporarily reassigned during an investigation into the incident.

Deputy Jake Thompson has been moved to a non-patrol assignment until a review of the arrest is complete. The Marion County Sheriff's Office identified the other involved deputies involved as Derrick Ramseyer, Dave Zahn, Ethan Griffith and Mark Ferron.

The arrest was caught on video by KGW outside of a Marion County search-and-rescue command center for a missing father and son.

The sheriff's office addressed the incident in a written statement Tuesday evening, saying it "continues to gather all relevant facts and information about this arrest and will be reviewing the use of force applied in accordance with the office policy."

The Marion County Sheriff's Office released its use of force policy on Tuesday.

After the review, Marion County Sheriff Jason Myers said he will have an outside agency review the findings.

"My ultimate goal with the review of this incident is to be thorough and transparent with our findings," he said.

The American Civil Liberties Union of Oregon also weighed in, calling on the Marion County District Attorney's Office to launch an investigation into the incident.

"That video is disturbing. It's violent. Honestly, if that does not represent excessive use of force, I'm not quite sure what does," said David Rogers, executive director of the Oregon ACLU.

Deputy Ethan Griffith said 28-year-old Kevin Straw, a transient who has been living in Detroit, was arrested after he continually entered the command post and disrupted crews.

Griffith said Straw was making so much noise that rescuers were unable to hear and communicate with search and rescue personnel. After he refused multiple commands from deputies to leave, they arrested him.

In a statement, the sheriff's office said Straw physically resisted, so deputies used force to take him into custody. Deputies also found a large fixed-blade knife in Shaw's possession.

Shaw was evaluated by paramedics and met with the mobile crisis response team. He was cited for interfering with police and resisting arrest and taken to the Psychiatric Crisis Center in Salem for a mental health evaluation, police say.

The sheriff's office said they were called out to the Detroit area on Saturday on reports that Straw was yelling at passersby and talking about cougars and military special forces. Deputies met with Straw, but he refused help from the mobile crisis response team, police said.

Anyone who witnessed or took video of the arrest is being asked to contact the sheriff's office at 503-588-5032 or via email at sheriff@co.marion.or.us.