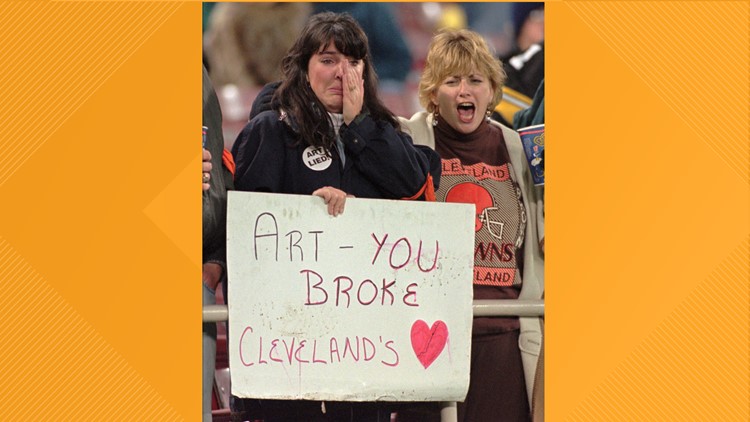 Photo by: Gene Puskar/AP
Cleveland Browns fan Lisa Vann, left, is crying as her friend, Jeanne Jolluck, yells after the team lost to the Pittsburgh Steelers. The game against the Steelers was played a week after Modell announced his intentions to move the Browns to Baltimore.

Art Modell is not being inducted into the Pro Football Hall of Fame, Dave Matthews Band snubbed by the Rock Hall and what's next in impeachment

CLEVELAND — On Wednesday, the top 3News headlines with Stephanie Haney include Art Modell not making the cut for the Pro Football Hall of Fame, Dave Matthews Band winning the fan vote but still not being inducted in the Rock and Roll Hall of Fame, and Speaker of the House Nancy Pelosi announcing who will present the case for removing President Donald Trump from office in his Senate impeachment trial.

Former Cleveland Browns and Baltimore Ravens owner Modell was not one of the three contributors selected for enshrinement into the Pro Football Hall of Fame, the Hall of Fame announced on Wednesday.

Modell was one of 10 finalists in the “Contributors” category, which pays homage to the contributions to the game of football made by an individual other than a player or coach. Of those 10 finalists, Steve Sabol (former NFL Films President), Paul Tagliabue (former NFL commissioner) and George Young (former NFL executive) were selected for enshrinement into the Pro Football Hall of Fame in Canton, Ohio later this summer. 3News' Matt Florjancic shares the full list of Centennial Slate inductees here.

In Cleveland, Dave Matthews Band was left out of the 2020 Rock Hall class, despite winning this year's fan vote. 3News digital anchor Stephanie Haney reached out to the Rock Hall to find out how the fan vote factored in to determining this year's eight-member class, and is awaiting a reply. 3News' Ryan Haidet has a full write-up of every Rock Hall inductee, ever, here.

In national news, on Wednesday morning, Pelosi unveiled who would be the impeachment managers representing Democrats in the Senate trial seeking removing of President Donald Trump.

According to the Associated Press, after the House officially votes to send the articles to the Senate, the entire prosecution team will line up behind House Sergeant-at-Arms Paul Irving and House Clerk Cheryl Johnson, who will be holding the articles. The procession will walk, two by two, through National Statuary Hall, past Pelosi’s office, across the Rotunda and to the doors of the Senate, The articles will be handed to Secretary of the Senate Julie E. Adams.

The Senate is expected to transform into an impeachment court as early as Thursday, but Senate Majority Leader Mitch McConnell says he expects the trail to start in earnest on Tuesday.

RELATED: Impeachment managers named ahead of vote to send articles to Senate

RELATED: How a therapy dog is changing students' lives at Lakewood High School