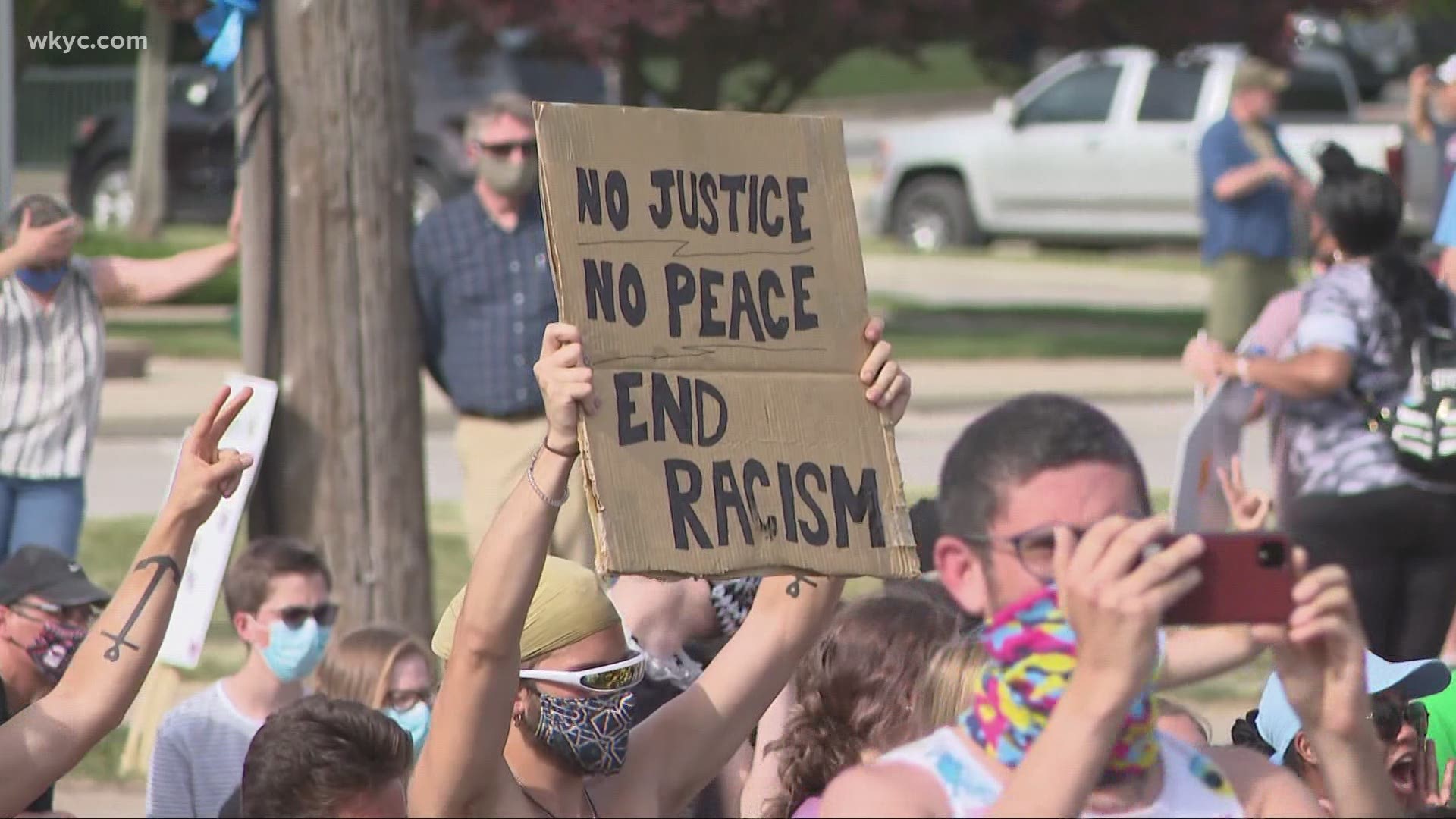 CLEVELAND — One year ago, George Floyd - a black man handcuffed on the pavement – died after a white Minneapolis police officer pinned a knee on his neck for more than nine minutes.

May 25th marks a painful anniversary for George Floyd’s family and for many Americans outraged by former police officer Derek Chauvin’s actions during a Memorial Day arrest.

Though tragic, Floyd’s death energized a movement for racial justice, now occupying a point on the timeline of galvanizing moments in civil rights history, such as the death of 14-year-old, Emmett Till, the voting rights March on Bloody Sunday and the police shooting of Michael Brown.

Cleveland’s May 30th demonstration against Floyd’s death attracted people from the city and suburbs, black and white. Some worried their kids could someday be victims of racial injustice.

“They will be here longer than I’m here,” an emotional mother, with a child in her arms, told 3News during the peaceful demonstrations along Lakeside Avenue. “And I’ll be dammed if this is still going on. I’m not okay with it, nobody should be okay with it.”

The demonstrations also fueled long smoldering debates about statues, flags and mascots with ties to the nation’s racist past. During the last year, the NFL’s Washington football team dropped its Native American logo. Numerous city’s removed monuments honoring those who fought against the nation during the Civil War. Polls showed a majority of Americans supporting more scrutiny of discrimination in policing.

Alan Nevel, MetroHealth Hospital’s Chief Diversity and Human Resources Officer, says Floyd’s dealth is a painful chapter in America’s biography. But it sparked meaningful dialogue inside and outside the corporate world.

"So within the MetroHealth system, what we've done is we've we started from the very top of our organization,” he said. “Both our system and our foundation board went through deep, immersive training around systemic racism and bias. And we literally ripped the Band-Aid off and showed very graphic images and had very uncomfortable conversations to get us to that point where we began to listen with empathy.”

And in the shadow of Floyd's death, Nevel said he has seen tangible signs of change.

“I live in a southwestern suburb and one day I pulled up to the main intersection, which is essentially downtown of that community,” he explained. “And I saw three young people that didn't look like me holding up signs saying racial injustice must stop. And one of them had a Black Lives Matter sign. These were three young people of a different race than mine that gave me hope and optimism.”

In April, a racially diverse jury found Chauvin guilty of murder, a decision cheered by many as long overdue accountability.

But America is far from a full reconciliation. Some aspects of American life – especially politics -- seem even more divided over race.

Republican-backed bills claiming to add needed election safeguards are raising concerns they will restrict voting opportunities among people of color.

And more recently, some political groups and lawmakers are publicly downplaying America’s racial past, complaining that schools are overplaying the role slavery played in the state’s early history. Some states are now placing limitations on racial inequality education in schools.

Jerome Baker, an activist and program manager at the YWCA, has spent years battling racial and economic inequity in the Cleveland’s Central neighborhood. He said he’s not surprised that some people are unwilling to embrace change.

“There’s good people in our society,” he said. “But unfortunately, there are a lot of people who still want to hold on to the system of what has benefited them. That speaks to the legal system, it speaks to our Supreme Court, it speaks to the different laws that have been introduced to try to maintain how things were. It speaks to people still wanting to fight and to keep things as they are.”