How one 9-year-old is using her personal trials to encourage others to be triumphant. 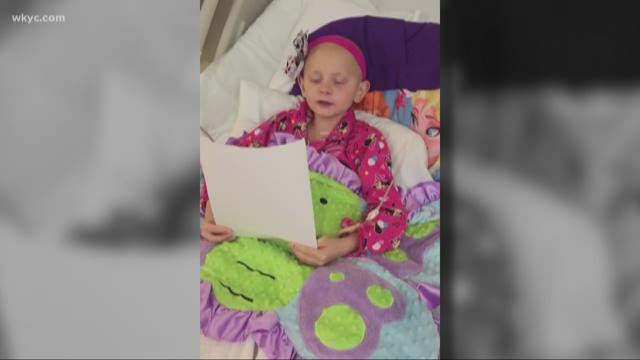 Kylie Rose is 'See The Possible' in a pint sized package.

The 9-year-old is practically a CEO of sorts; with the creation of a movement that is raising thousands and thousands of dollars for sick kids.

It started with her own cancer diagnosis--not once, not twice, but three times an aggressive Wilms tumor reared its ugly head.

But,it picked the fight with the wrong little positive warrior.

But it was from her Akron Children’s Hospital bed that the benevolent idea of Kylie’s bags of Love was born.

Kylie scribbled her business plan on a piece of paper.

“I hope that every boy and girl who has cancer can live. I can help by making Kylie's bags of love”.

So for Christmas, Kylie asked for a real deal sewing machine.

Not for herself, but to personally sew bags of love,stuffed with love gifts.

Why would she do that for perfect strangers? You ask.

“I want to make them happy,” six genuine, pure, powerful words, rolled right off Kylie’s lips like she thought maybe that was a no brainer answer.

That’s when we became Kylie’s newest fans and the list grown by the minute.

We were sitting with Kylie her parents and her little sister and brother in their Copley home.

Her guests would be arriving soon for her 9th birthday party.

This cancer warrior with the big heart and more empathy than most adults, instead of gifts, asked her friends to bring playdoh and journals and markers and coloring books and anything else that would bring a smile to a kid kickin’ cancer.

That day, they stuffed more than 700 Kylie’s bags of love, destined for kids in hospital rooms like Kylie had been so many times.

With cancer in the rear view mirror, resilient Kylie has also been making good on another mission to raise money for Akron Children’s Hospital.

With the help of her parents, they have set thousands in motion for Kylie’s 5K run,now three years running.

More than $52 thousand has been raised and another $30 thousand is expected to be raised at this year's race in August. .

All this is happening while Kylie makes her way to 1,000 bags of love.

No surprise then, that in November, Kylie Rose Jacobs earned the Fundraiser Professionals Youth in Philanthropy Award for 2017.

“We’re a little biased, but she gave the greatest speech that day. She really did. Of all groups. She is a humble balanced little leader. It’s amazing,” Kylie’s awesome dad Eric said.

It was hard for most of the interview to hide the HUGE love he has for Kylie and his family.

The family that has been through so much.

“You can’t drown in the whys. Why her? Why us? You have no choice but to just wake up and fight,” says this proud dad, part of a movement fighting for other kids now.

And in 2018 they celebrated yet another blessed birthday.

Grandpa Tim Truax’s is going to have to keep adding chapters to the children’s book he authored, “Kylie Rose Kickin’ Cancer”.

It’s sort of a playbook for other little cancer warriors.

And Andy and Stefanie Shepperd started Project Outrun because of Kylie.

They are on their way to giving out 100 pairs of running shoes to kids who design them each individually and set goals then bust through literal finish lines wearing those shoes.

Kylie Rose is on a roll with #TheGoodStuff she started.

We can’t wait to watch just how many ways this beautiful Kylie Rose continues to bloom.