Tiffany Tarpley and Dave DeNatale hosted the room featuring seven Northeast Ohioans who had a real-time conversation during the debate. 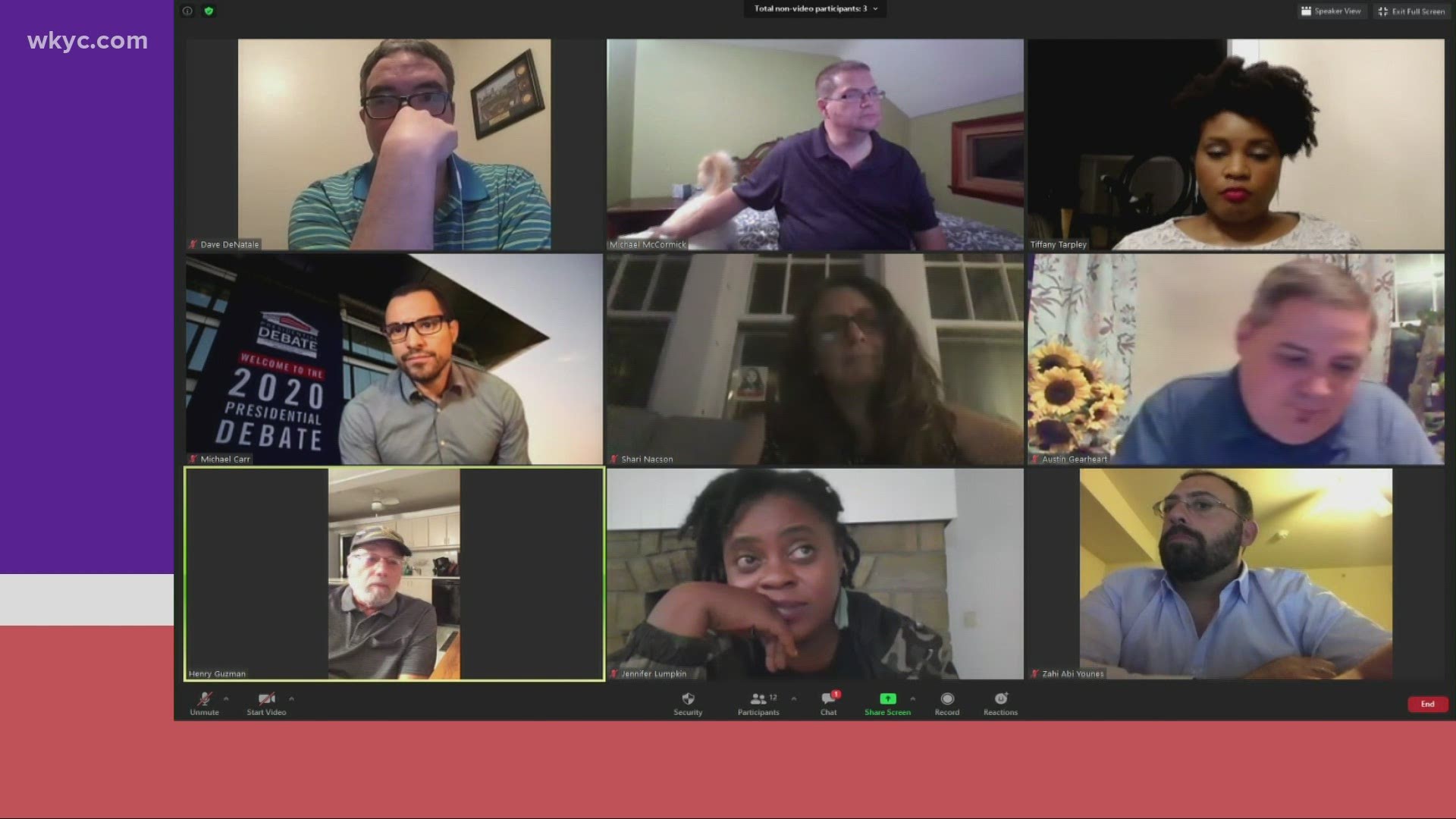 CLEVELAND — It’s been called the most important election in our lifetimes.

In the midst of the COVID-19 pandemic and racial tensions that are causing deep divisions in our nation, President Donald Trump is seeking reelection to a second term as he faces off against former Vice President Joe Biden.

The candidates were in Cleveland Tuesday night for the first of three presidential debates. And as President Trump and Biden answer questions from moderator Chris Wallace, our 3News debate Zoom room was following along in real time.

3News’ Tiffany Tarpley and Dave “Dino” DeNatale were the hosts during the evening's event. They were joined by seven Northeast Ohioans who responded to our call out for participants to have a thoughtful, respectful conversation about what issues matter most to them, why one candidate addresses those issues better than the other, and how we can go forward as a nation, despite our differences.

Here were our participants in the Zoom debate room:

I have been married to my amazing wife nearly 12 years; I have two sons, my oldest is a frontline worker in a grocery store here in town, and my youngest is highly interested in computer coding/technology and has Autism."

Shari Nacson (Voting for Biden) is a clinical social worker, freelance editor, writer, and nonprofit consultant whose pro bono work centers around trauma and social justice. After serving as grand jury foreperson, she has become passionate about criminal justice reform.

Jennifer Lumpkin (Voting for Biden) is a Catalytic Strategist and Community Organizer working primarily on voter mobilization and equity-building in Northeast Ohio. Jennifer founded Creative Community Builders, LLC in 2016 after organizing in Cleveland and Washington, D.C. Her organizing and partnership practice are rooted in supporting the development of sustainable communities through creative relationship building, cultural organizing and mindful resource connections.

Austin Gearheart (Voting for Trump): "I am an Educator, Outreach Pastor, husband, and a father of two boys. I enjoy spending time with my family, fixing up my house, and traveling."

Zahi Abi Younes (Voting for Trump) is a Senior Finance Consultant for an ERP software Company. He's involved in the Arab American Community primarily through event planning, social events, and political talks. The aim of these talks is to build good diplomacy between the Arab community and the US Administration.

Michael Carr (Voting for Biden): Michael is a resident of Cleveland and a graduate of The Ohio State University. He holds a master's degree in economics from Germany and has travelled to over 60 countries, using these experiences to challenge his own beliefs. "I work for a climate advocacy NGO (non-governmental organization). I really like the idea of having a panel, it's good to have an idea of what is going on in the election process. There's a lot going on in the world so it's good to have a conversation about it."

Henry Guzman (Voting for Biden): "I am from Northeast Ohio originally, having lived in Youngstown and Cleveland. I am a proud American of Puerto Rican heritage. I think it’s important to let voters know that I as a Purple Heart Vietnam Combat Veteran, do not appreciate being called 'suckers and losers.' We value our service to our country."

You can watch our conversation from Tuesday night in the player below: