Many political leaders at or near the Capitol building were impacted by the attacks, including some with ties to Northeast Ohio. 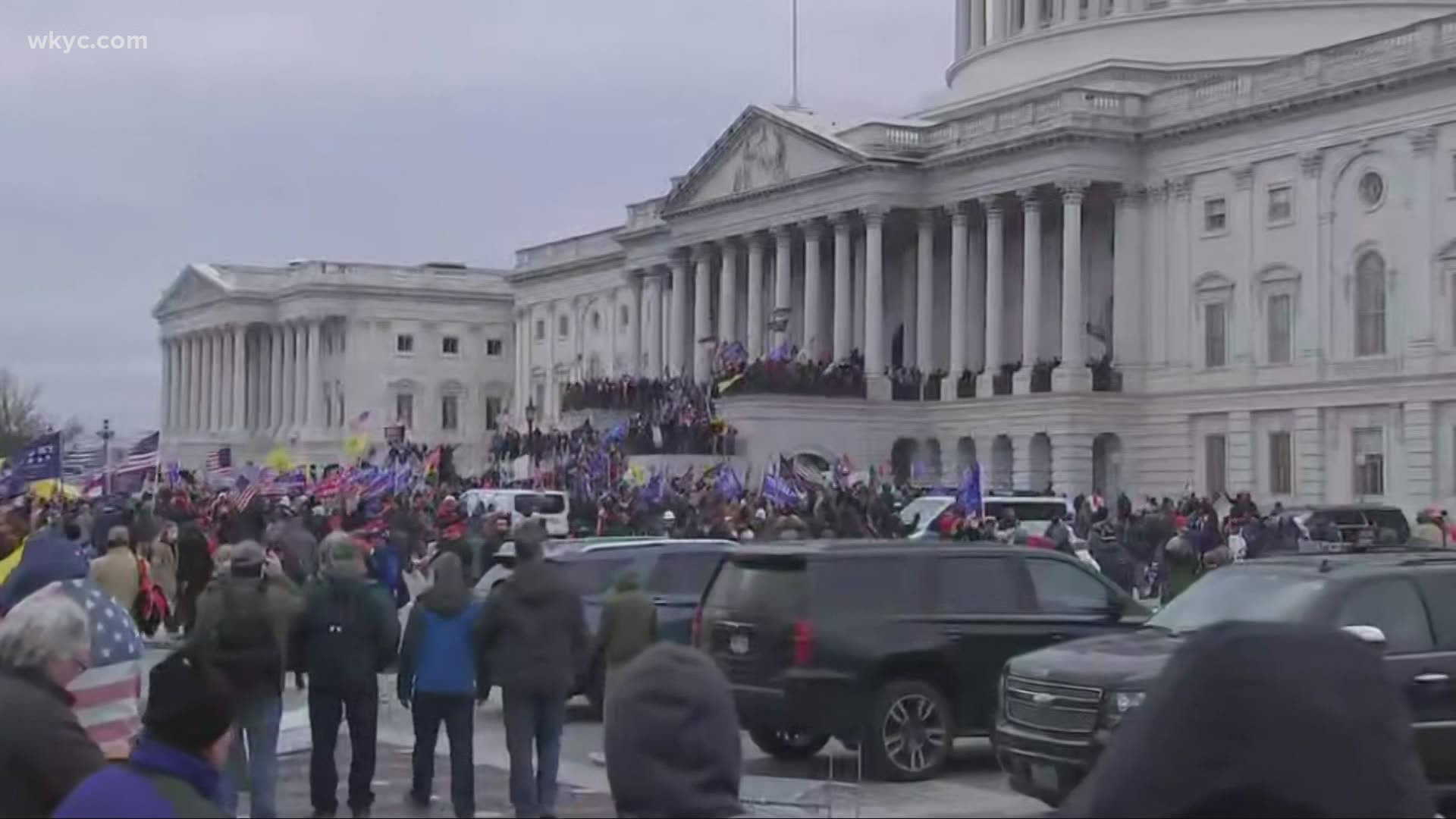 OHIO, USA — Exactly two weeks ahead of the 2021 Presidential Inauguration, protestors have stormed the United States Capitol in Washington D.C.

Angry supporters of President Donald Trump were able to storm the Capitol, halting congressional deliberations and forcing the evacuation of senators and members of the House of Representatives.

Many political leaders at or near the Capitol building were impacted by the attacks, including some with ties to Northeast Ohio. 3News even spoke directly to some who were either at the event or condemned it.

Chester Township Trustee Skip Claypool, who traveled on the bus from Chardon to Washington, said in a text message during the ride that he believes Trump supporters who participated in the peaceful demonstration sent an important message, one he claims is being ignored by media.

"Keep mind that over a million patriots were in Washington," he said, although some estimates put the numbers much lower. "Ninety-nine percent of the rally was peaceful and focused on our dissatisfaction with the media and a political class that will not address or acknowledge clear fraud. What are we to do? Our election process is corrupt. That is irrefutable.

"This is the beginning not the end. Things will need to change. A big problem is a dishonest media. I watched tonight as the media played a 30 second clip over and over. Of those forcing themselves into the state house. The peoples house. No one showed the peaceful March and protest in which we carried flags and sang God Bless America. It’s is dishonest and discussing. I have videos of that part of the protest."

Dozens of lawsuits challenging the election have been dismissed by judges and election officials have cataloged and debunked election fraud claims.

Former Cleveland Mayor and Ohio U.S. Rep. Dennis Kucinich, who watched demonstration and riot from his home in Cleveland, said the breach of the Capitol was an affront to the U.S. Constitution.

"I was I was on the floor of the House when they evacuated for 9/11," Kucinich, who served as a member of the House of Representatives for 16 years, said during an interview on the Zoom app. "The images that come out of today are very shocking, and I've heard from people literally from all over the world who are saying 'What's going on in America?'"

Holding up a pocket copy of the Constitution, Kucinich said people need to rally around it, not claims of voter fraud.

"It's pretty worn because I refer to it all the time,” he said. “This is all we have, this is what holds this the glue that holds the country together, and there's a way that when we have differences of opinion, there's a way within the law that we are able to express that.

"When individuals take the law into their own hands, they go and basically want to tear up this constitution. That cannot be tolerated and we really have to, as Americans, condemn any kind of actions which smack of an insurrection, of a rebellion against the government of the United States."

Many other Ohio politicians took to social media to provide their thoughts and an update on their safety and the safety of those closest to them as the chaos ensued.

Gov. Mike DeWine issued a lengthy statement on Twitter Wednesday afternoon, saying that those who attacked the Capitol "breached the Constitution."

The stopping of the count of the Electoral College votes has occurred because the security of the U.S. Capitol has been breached by a violent mob. As a nation of laws, this is simply not acceptable. Lawlessness is not acceptable.

Peaceful demonstrations outside the Capitol are an exercise of the demonstrators’ First Amendment rights. Stopping the constitutional process by which we elect the president is not.

Lt. Gov. Jon Husted took to Twitter to share his thoughts saying that the events at the Capitol resemble that of a "third world nation" and the actions displayed are "not patriotic."

What’s going on inside the U.S. Capitol looks like what we would see in a third-world nation. It does not look like America. It is not patriotic. The constitutional peaceful transfer of power is what makes America special. What’s happening right now is a sad day for America.

Secretary of State Frank LaRose took to Twitter with his thoughts saying that there is "no excuse" for the actions that took place Wednesday at the Capitol.

The violence and flagrant disregard of the law at the U.S. Capitol is un-American. It goes against our values as a nation. There's no excuse for it. None.

Those bent on violence and destruction should leave so the work of our elected officials may continue.

Former Gov. John Kasich also weighed in saying what's happening is "unbelievable" and that" we must learn from this."

What I'm seeing happening in our nation's capital is an absolute disgrace and it was brought on by demagoguery and lies. It's unbelievable that this could be happening in our precious America. We must learn from this.

Senator Rob Portman also took to Twitter to share his thoughts saying that President Donald Trump should condemn the "unacceptable vandalism and violence" taking place at the Capitol.

The right to protest peacefully is protected under the Constitution but the actions by violent mobs against our law enforcement and property at the @USCapitol building today are not. @realdonaldtrump should condemn this unacceptable vandalism and violence.

"This is a horrific day for American democracy and liberty. My deepest gratitude goes out to the selfless men and women of the Capitol Police for keeping my colleagues and our public servants safe. The attack on the U.S. Capitol today is an assault on democracy, decency and our Constitution. Those who have stoked and perpetuated this violence must be held accountable to fullest extent of the law. Such lawless behavior will not be allowed to prevent our constitutional mandate. I look forward to Congress reconvening and completing its work to certify America’s vote and to doing the work we must to heal this nation."

This, all of this, is on Donald Trump. His rhetoric and actions to incite such mayhem for political gain is reprehensible and dangerous. This is not our America. https://t.co/A8rSg1twHd

Rep. Jim Jordan, one of President Trump's biggest supporters who raised an objection to the electoral college results, gave a two-line statement telling the rioters to stop.

"As a very tense situation continues to unfold, I condemn these violent mobs in the strongest terms," said Rep. Gonzalez in a tweet. "The peaceful transition of power is essential to our democracy no matter how difficult it is and we all must honor this sacred tradition. Please pray for our country."

As a very tense situation continues to unfold, I condemn these violent mobs in the strongest terms. The peaceful transition of power is essential to our democracy no matter how difficult it is and we all must honor this sacred tradition. Please pray for our country.

This is shameful, unacceptable, and un-American! Violence is not the answer. Everyone must stand down and let Capitol Police do their job and secure the area!

Rep. Tim Ryan said he was "safe" inside the building, and asked his supporters to pray for those inside and for the country.

Thanks to everyone for reaching out. I am safe. In lockdown.

Rep. Dave Joyce pleaded with those who breached the building to "end this chaos and violence," and later condemned the president's statement against the riots as "not enough."

If you voted for the President, you also voted for law and order and to restore respect for law enforcement officers who risk their lives to keep our communities safe.

Mr. President, this is not enough.

These are not voters protesting the election. These are criminals who are destroying our nation's Capitol, threatening duly elected lawmakers and their staffs, and endangering the officers sworn to protect them. https://t.co/yIqrTaCOtZ

An attack on the orderly functioning of our government is inexcusable. This is absolutely ridiculous. pic.twitter.com/7fJTXxvcmV

In a tweet, Rep. Marcia L. Fudge reflected on the day and says it will live on in "infamy."

This is a sad day in the history of this great nation. This is not the way, even when we disagree. Violence is never the answer and order must be restored. 2/

My staff and I are safe. Thank you for your concern.

In a tweet, Senator Sherrod Brown confirmed that he and his staff. He also called for the violence at the Capitol to end.

My staff and I are safe.

The violence at the Capitol needs to end now.

The lives of countless workers – journalists, staff, and Capitol Police are being put at risk by this attack on our democracy.

On Thursday morning, Senator Brown also released a statement detailing his thoughts on the Wednesday attack on the capitol and endorsing the proposal of invoking the 25th Amendment to remove President Donald Trump from office.

“Yesterday was a dark day for our country. Domestic terrorists attacked our seat of government, at the behest of the President of the United States. This was his last, desperate attempt to overturn the will of the American voters, but he failed, and democracy won. We must hold the president accountable for inciting this attack on our country," Senator Brown wrote in the statement. "The cabinet and vice president should immediately invoke the 25th Amendment to remove him from office, to prevent him from doing more damage between now and Inauguration Day. And in 13 days, Joe Biden and Kamala Harris will take their oaths of office and begin the work to bring out the best in our nation rather than the worst, supported by a Democratic Senate.”

Rep. Anthony Gonzalez's office confirmed he was "safe and is following guidance provided by USCP." The congressman gave these thoughts on Twitter:

As a very tense situation continues to unfold, I condemn these violent mobs in the strongest terms. The peaceful transition of power is essential to our democracy no matter how difficult it is and we all must honor this sacred tradition. Please pray for our country.

Rep. Troy Balderson had joined Gonzalez in pledging not to object to the electoral college tally, and today called for the riots to "stop immediately."

I implore all those participating to cease the violence and I urge @realDonaldTrump to call for this violence to stop immediately.

It's time for our nation to come together. This violence is not the way forward. #CapitolBreach pic.twitter.com/QAXE4W4Scg

In contrast, Rep. Bill Johnson did plan to object, but said he was "shocked and dismayed" by those who stormed the building.

I’m shocked and dismayed by the violence here in the Capitol. This is not the way Americans solve our problems.

Chairman of the Ohio GOP, Jane Timken took to Twitter and issued the following statement condemning the attack at the Capitol.

As Americans we have the constitutional right to redress our grievances but not with violence. What’s happening in the Capitol is wrong and not the way forward.