Reactions to the report's release were, as expected, mixed along party lines. 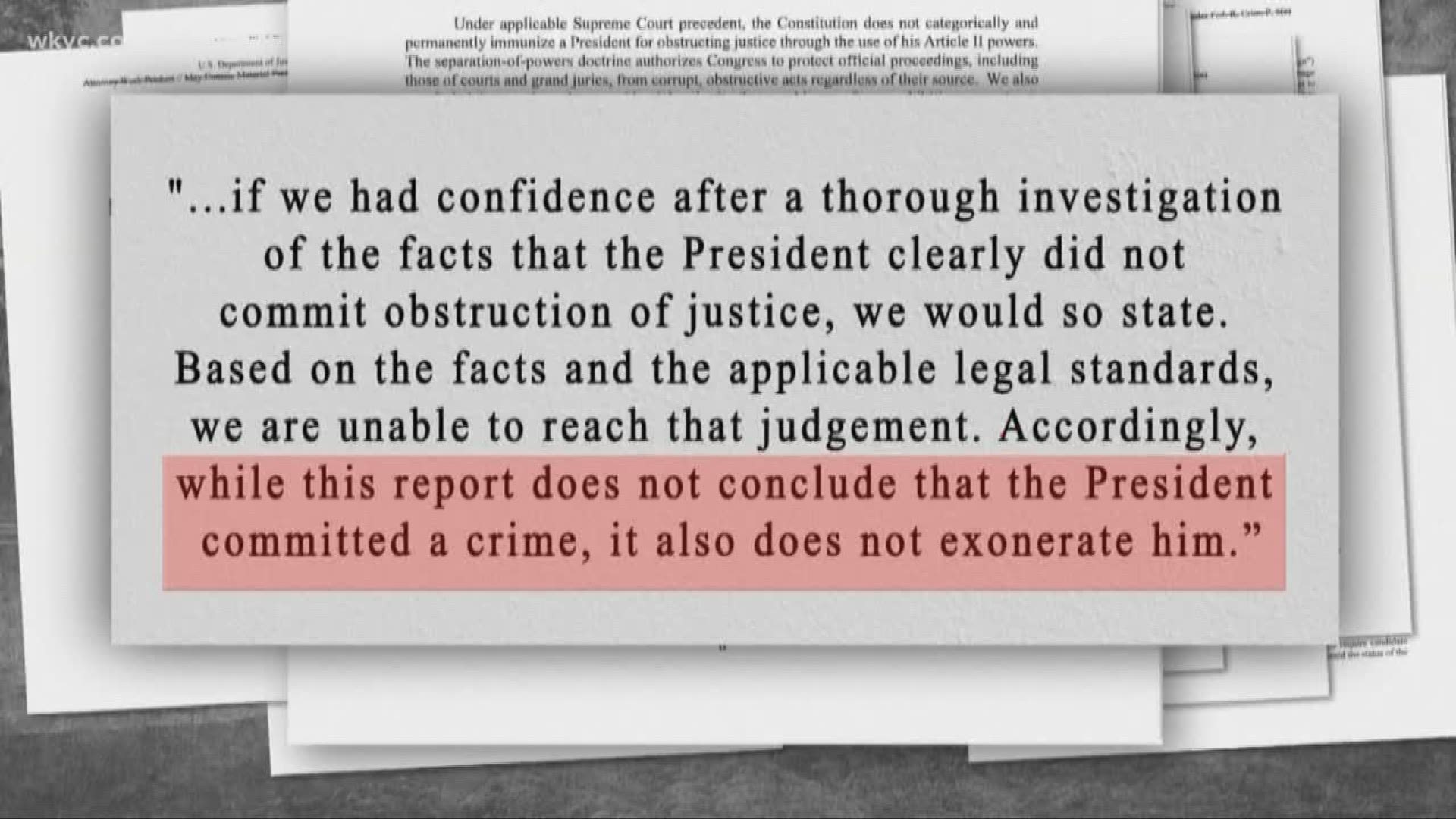 The report, while concluding that Russia did indeed actively interfere with the election in an effort to elect President Donald Trump, could not conclude the Trump campaign had colluded with the Russians due to lack of evidence. It did, however, outline several instances where the president may have obstructed justice, although in the end it has been left up to Congress to determine whether or not Trump committed any crimes.

Reactions to the report's release were, as expected, mixed along party lines, and that included politicians from across Northeast Ohio. Democrats shared a great deal of anger about Barr's actions (with some claiming he is acting in the interests of the president), while many Republicans attacked Democrats and the media for perpetuating a "hoax."

U.S. Sen. Sherrod Brown emphasized the importance of preventing more Russian interference in future elections, and that "President Trump should get off of Twitter and help lead that effort":

"My office and I are still thoroughly reviewing the report, but we know the President has a history of not telling the truth. Already, five people in the President’s circle have been convicted of crimes and there are as many as 14 ongoing criminal investigations that have yet to be resolved. So, the American people deserve to hear the truth directly from Robert Mueller in public testimony before Congress. At the same time, we cannot afford to lose focus on the fact that a foreign government attacked our elections. Our security is bigger than any one political party, and Republicans and Democrats need to come together and do what it takes to protect our institutions. President Trump should get off of Twitter and help lead that effort."

U.S. Rep. Jim Jordan, one of President Trump's most loyal supporters, declared, "No collusion! No obstruction!," and later sent out a series of tweets attacking Democrats for their continuing investigation, which read:

"Democrat members of Congress should take a deep breath and read the Special Counsel’s report before jumping to conclusions.

"The Attorney General concluded what we long suspected. No collusion. No obstruction. It would be a miscarriage of justice to use cherry-picked bits of information from the report to sow further divisiveness and spread conspiracies that serve only to undermine our democratic institutions.

"One thing, however, is clear with the release of the report today: this sad chapter of American history is behind us. It’s time to turn back to the people’s work of improving the efficiency, economy, and effectiveness of how their tax dollars are spent.

"Despite the Special Counsel’s findings, it seems nothing will stop Democrats in Congress from trying to get the President at all costs. We just learned this week that they have Memoranda of Understanding to coordinate their attacks.

"It would be a shame for the onslaught of misguided politicized investigations to continue. The American people expect more from those who represent them in Washington."

Rep. Bill Johnson quipped, "No collusion. No obstruction. No anything," and released the following statement:

"The release of Robert Mueller's report to Congress and the public today, once again, very clearly, indicates there was no collusion and no obstruction between then candidate Donald Trump - or his campaign - and Russia. This reinforces the summary sent out on March 24 by Attorney General Barr. The investigators spent many months and considerable tax dollars and came to the same conclusion that so many of us did long ago.

"It's over. Now that the Trump-Russia "collusion delusion" has finally been put to rest, the American people deserve to know how this mess started and who was behind it (by the way...we already know the why). Those responsible for perpetrating this hoax must be held accountable - and, I think they will be."

Rep. Bob Gibbs also went on the defensive for the president, accusing Democrats and the "mainstream media" of looking "foolish":

"No collusion. No obstruction. Democrats and the mainstream media simply cannot accept reality. They were disappointed with the conclusions of the Mueller report and now they feign outrage over the Attorney General’s efforts in making the report public. After 22 months, millions of taxpayer dollars, and thousands of subpoenas, their narratives have been shattered and they are moving the goalposts to avoid looking foolish.

"However, there are two outstanding questions: A - Was the FISA process corrupted by political bureaucrats for electoral advantage? And B - At what point in his 22-month investigation did Mueller know there was no collusion between Russia and the Trump campaign?"

Rep. Marcy Kaptur said she remains "concerned" about the actions of Attorney General Barr, and called on Mueller to testify before Congress:

"Even as Congress and the American people begin to digest the implications of the Mueller Report, I remain deeply concerned by Attorney General Barr’s handling of the Special Counsel’s investigation into Russian involvement in the 2016 election,” said Rep. Kaptur. “The Attorney General has injected himself as an unnecessary filter in this matter. His actions do not inspire confidence in his impartiality and have failed to provide closure to the American people.

"America deserves closure. Finally, the public has access to the full report subject to what hopefully are impartial and appropriate redactions. The author of the report, Special Counsel Robert Mueller, must provide public testimony before the House and Senate without delay. The Special Counsel must also provide testimony to Congress on the full, unredacted findings of his report, in a classified setting if necessary. The American people deserve nothing less than the truth. I look forward to reviewing the over 400-page report in the coming days."

Rep. Tim Ryan, who is currently running for president, went a step further, and accused the attorney general of personally covering up for the president:

"Today, Attorney General William Barr demonstrated that he has decided to be the personal attorney for President Trump rather than fulfilling his role as attorney for the American people. It’s beyond unacceptable. I will continue reviewing the redacted version of the report and will pressure the Justice Department to reconsider its decision to not release the unredacted report to the American public. This report proves once again that the Russian government interfered in the 2016 election with the explicit goal of helping Donald Trump win the presidency. It is time for President Trump to stop believing Putin over our intelligence community.

"I support the House Intelligence Committee, the House Judiciary Committee, and the House Oversight Committee in continuing to investigate these matters and get to the bottom of what happened in the 2016 election and if President Trump obstructed justice. Special Counsel Robert Mueller should be called to testify before Congress. No more summaries, no more redactions – the American people deserve complete transparency. Full stop."