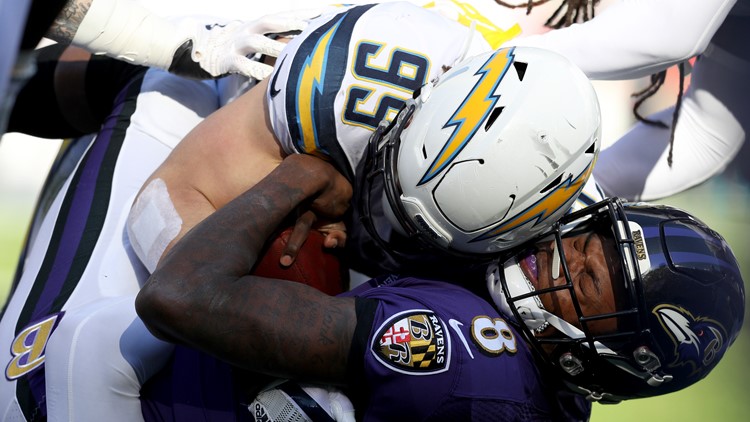 Photo by: Getty Images
BALTIMORE, MARYLAND - JANUARY 06: Lamar Jackson #8 of the Baltimore Ravens gets tackled by Joey Bosa #99 of the Los Angeles Chargers during the first quarter in the AFC Wild Card Playoff game at M&T Bank Stadium on January 06, 2019 in Baltimore, Maryland. (Photo by Patrick Smith/Getty Images)

As Al Pacino once said, football is a game of inches.

When it came to my picks, last weekend turned out to be a game of 144 inches.

Although I ultimately went 2-1-1 in my Wild Card picks last weekend, two successful 2-point conversions likely prevented me from being 1-3. Nevertheless, I'll take the winning weekend, which brings my total record for the season to 121-112-11.

With the Divisional Round upon us, we have another big weekend ahead. Let's keep the momentum rolling.

I like the Chiefs to win this one outright, but this feels like a game that will come down to the final minutes. Plus, if the Colts can run as effectively as they did on Houston's defense last weekend, just imagine what they'll do to Kansas City's front-seven.

Again, I like the Chiefs to win and am totally expecting a big showing from Patrick Mahomes. But between Andy Reid's postseason history and the hot streak Indianapolis is currently riding, five points just feel like too many to pass up.

I've been riding the Rams all season and despite some late-season stumbles, I see no reason to stop here. Todd Gurley is essentially coming off of four weeks of rest, while the Cowboys might not even be in the Divisional Round if not for Seattle's ultra-conservative play-calling.

Seven points make for a hefty spread, but Los Angeles has done plenty this season to prove it possesses the blowout gene. Ezekiel Elliott facing the Rams' shaky rushing defense admittedly gives me some pause, but I'll stick with Gurley to pave the way in a runaway win.

Even with New England being the team coming off a bye week, I'm not convinced the Chargers aren't simply the better team. And as it showed in its win over the Ravens last week, playing on the East Coast for a 1 p.m. ET start is hardly an issue for Los Angeles, which has now amassed an 8-1 record on the road this season.

If Joey Bosa and Melvin Ingram can get to Tom Brady on a consistent enough basis, I could even see the Chargers winning this one outright. Even if they don't, I'll settle for having the 4 points on my side.

When the Saints squared off with the Eagles earlier this season, New Orleans won 48-7 -- and that was when Carson Wentz was still in the Philadelphia lineup.

For as much postseason success as the Eagles have found with Nick Foles, they wouldn't even be in this game if not for Cody Parkey's missed field goal. The Saints, meanwhile, have established themselves as arguably the top team in football this season and should prove as much with a dominant showing on Sunday.