Baker Mayfield on Duke Johnson trade request: 'It's not awkward. It's self-inflicted'

On Tuesday, Cleveland Browns quarterback Baker Mayfield made it clear he took issue with the way running back Duke Johnson handled his trade request from the team. 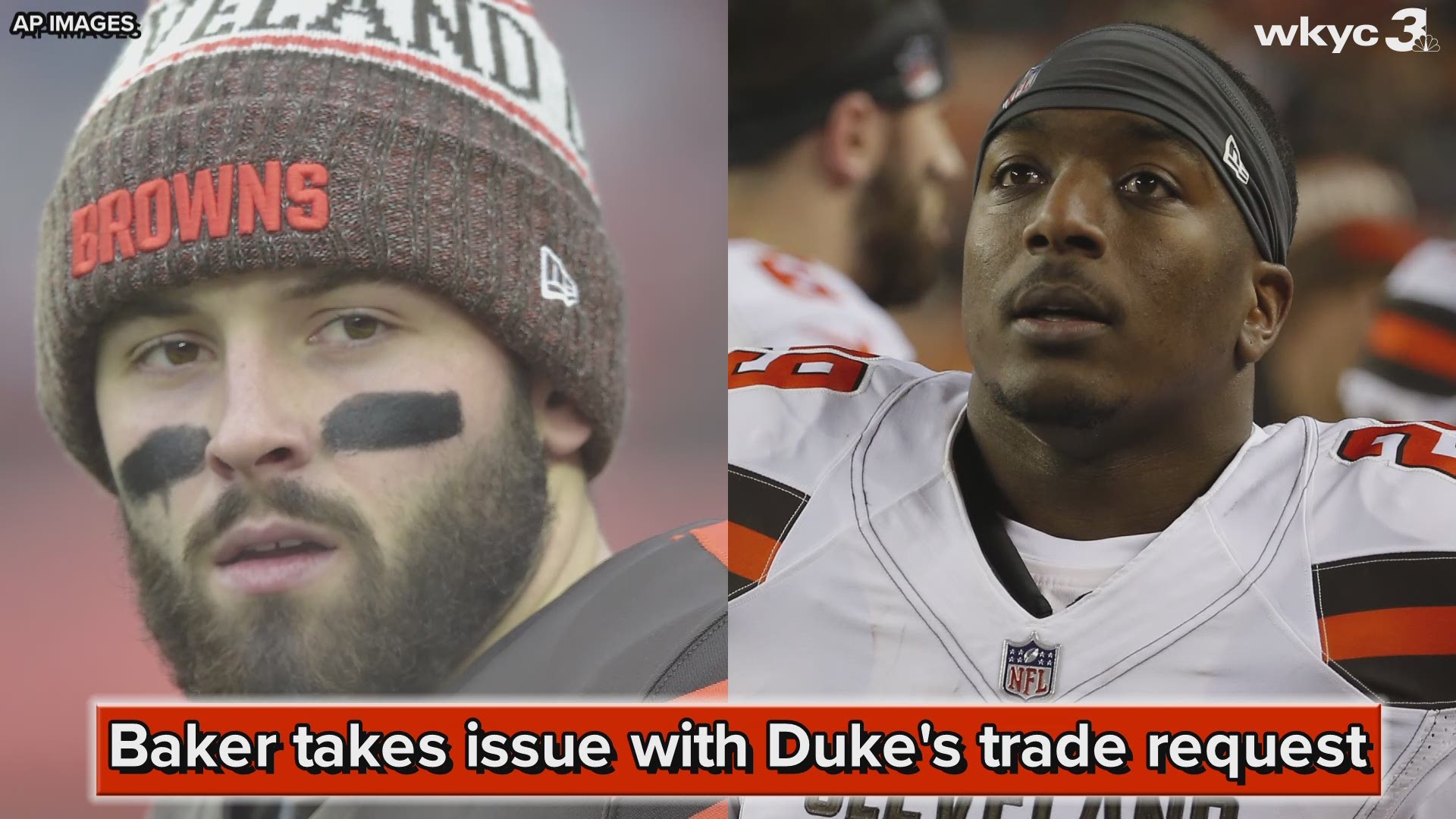 And when asked for his thoughts on Duke Johnson's still-standing trade request from the Cleveland Browns, the team's second-year quarterback made no exception.

"It's not awkward," Mayfield rebutted when a reporter described the situation as such.

"It's self-inflicted," Mayfield replied. "It is what it is. It's not awkward for anybody else in this building."

Credit: Rick Scuteri
Cleveland Browns running back Duke Johnson (29) looks for a running lane during the first half of a prime-time game against the Denver Broncos at Denver Broncos Stadium at Mile High in Denver on Saturday, December 15, 2018.

Make no mistake, Mayfield wasn't referring to the Browns' decision to put Johnson on the trade block -- as the running back claimed happened first -- but rather his own request to be dealt. Rather, the former No. 1 pick seemed to be applying his mantra of "if you're not with us, you're against us"  toward a teammate who has now made it publicly known he'd prefer to play somewhere other than Cleveland.

"He's gotta do his job," Mayfield said. "He says he's a professional. I hope he does his job."

To Johnson's credit, he insisted he would do as much -- after all, he reported to minicamp, albeit only because it's "mandatory." But the Miami (Fla.) product also didn't rule out continuing his Browns career should the team fail to trade him between now and the start of training camp or beyond.

That's not to say Johnson's trade request won't become a distraction for a team looking to break a 16-season postseason drought. And the running back's public comments on Tuesday -- his first since reportedly requesting his trade in April -- likely only added fuel to a fire that Mayfield otherwise saw as avoidable.

"I wouldn't say, 'I'm not happy about it.' It's just the way he's handled it. It can be a stir-up in the media," Mayfield said. "If somebody wants to be here, they'll be here in that situation. We've got guys in our locker room that are dying to get playing time, that are dying to be here."

Credit: Matt Florjancic
Cleveland Browns quarterback Baker Mayfield winds up to deliver a pass down the field during a drill at OTA practice in Berea, Ohio on Wednesday, May 22, 2019.

For Johnson, the situation isn't as cut and dry.

While he insisted he harbors no ill-will toward the Browns, he was also clearly hurt by being put on the trade block he signed an extension with despite enduring 1-15 and 0-16 seasons with. And with Nick Chubb coming off a breakthrough rookie season and the team having also signed former Pro Bowl selection Kareem Hunt, Johnson figured to be the odd man out once Hunt returned from his eight-game suspension to start the upcoming season.

Mayfield is well aware of Johnson's history in Cleveland, where he's amassed 3,456 total yards (2,170 receiving, 1,286 rushing) and 13 touchdowns despite having his role constantly change over the course of four seasons. But that doesn't change his opinion on the matter, which currently remains unresolved.

"I get it. Duke's been here for years," Mayfield said. "But it's about, 'What are you doing right now?' The past is the past.

"It's about right now and what are we going to do?"