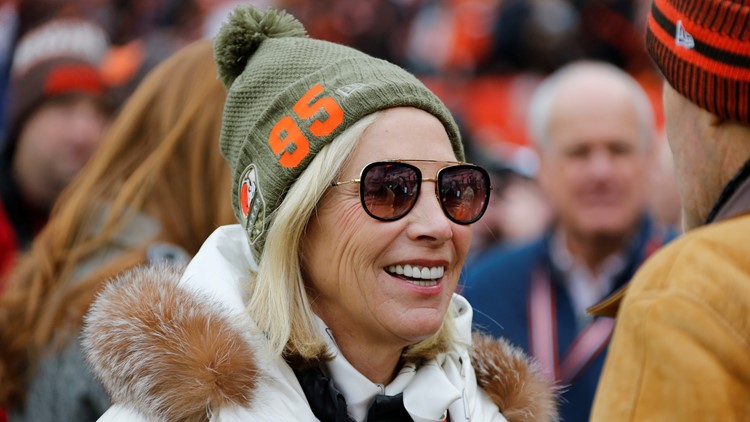 Photo by: Ron Schwane/AP
Cleveland Browns co-owner Dee Haslam is shown wearing a hat bearing Myles Garrett's number before a game against the Miami Dolphins at FirstEnergy Stadium in Cleveland on Sunday, November 24, 2019.

CLEVELAND — The Cleveland Browns will play the balance of the 2019 season without Pro Bowl defensive end Myles Garrett, who was indefinitely suspended by the National Football League for his role in a brawl with Pittsburgh Steelers quarterback Mason Rudolph last week, but his spirit still is very much with the team.

Before the Browns took the field for their game against the Miami Dolphins at FirstEnergy Stadium in Cleveland Sunday, owner Dee Haslam was on the sideline talking with various team officials and family members…and she was sporting a “No. 95” in orange print on her winter hat while doing so.

Garrett lost his appeal and all of his penalties, including a ban for at least the rest of this season, an additional fine of more than $45,000 and the loss of six game checks adding up to more than $1 million docked pay, were upheld by the hearing officer.

Garrett was suspended indefinitely just 12 hours after last Thursday’s 21-7 win over the Pittsburgh Steelers for an on-field brawl that resulted in his ejection, as well as the disqualifications of Ogunjobi and Steelers offensive lineman Maurkice Pouncey.

The incident boiled over when Garrett brought Rudolph to the ground well after a third-down play with eight seconds remaining in the game.

Following the tackle, which was not penalized, Rudolph appeared to rip off Garrett’s helmet after delivering a couple of kicks below the belt of the Pro Bowl defensive end. Garrett responded by ripping off Rudolph’s helmet with several powerful tugs, and later, swinging it at and connecting to the quarterback’s head when the signal-caller pursued the matter further.

After Garrett ended up on the ground after getting tangled up with Steelers offensive lineman David DeCastro, Pouncey tried to protect his quarterback and delivered several kicks to the helmet and multiple punches to the Browns’ Pro Bowl defensive end.

RELATED | ‘Strength in numbers.’ Everybody needs to step up for Cleveland Browns to replace Myles Garrett

RELATED | Baker Mayfield: Jarvis Landry is ‘unbelievable teammate, who is even better to have’ on Cleveland Browns