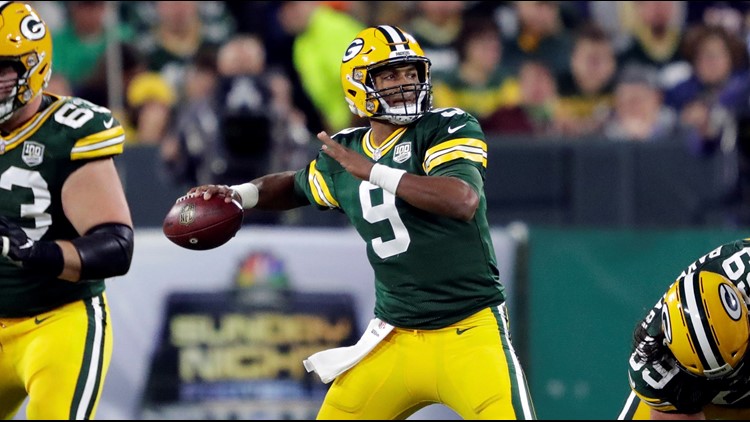 Former Cleveland Browns quarterback DeShone Kizer impressed the Green Bay Packers so much so during training camp and the preseason that they named him the backup to Aaron Rodgers and traded Brett Hundley to the Seattle Seahawks.

When Rodgers suffered an injury in the first half of the Packers’ 24-23 win over the Chicago Bears in the 2018 regular-season opener at Lambeau Field Sunday night, Kizer was pressed into service, but struggled to hold onto the ball, as he committed two turnovers, one of which was returned for a touchdown.

Kizer was relieved by a returning Rodgers after completing just four of his seven throws for 55 yards with one lost fumble and an interception.

.@52Mack_ is AS ADVERTISED. pic.twitter.com/7JEfhgoTgB

Kizer handed off on his first two plays, but on third-and-six from midfield, he completed a short pass to wide receiver Randall Cobb that turned into a 29-yard gain. Then, on the next snap out of the shotgun formation, Kizer completed an 11-yard throw to wide receiver Davante Adams that moved Green Bay into the red zone.

On third-and-goal from the Chicago nine-yard line, Kizer took the snap, pump-faked in the pocket and tried to scramble to the right in order to extend the play. However, Bears defensive end Khalil Mack stripped Kizer of the football and took the recovered fumble to the 21-yard line.

Kizer’s rough night continued on his final drive, as on first-and-10 from Green Bay’s 49-yard line, he stepped out of a tackle attempt from Mack only to be sacked by rookie linebacker Roquan Smith for a nine-yard loss.

Then, two plays later, with the Packers facing a third-and-19 from their own 30-yard line, Kizer tried to loft a pass to running back Ty Montgomery on the right side of the field when the Bears sent a heavy rush into the pocket.

However, Mack was there to intercept the pass, and after breaking free from a tackle attempt by a Packers offensive lineman, hustled down the field for a 27-yard touchdown, his first score since joining the Bears through a post-preseason trade from the Oakland Raiders.

Kizer led the NFL in red-zone turnovers in 2017, including six interceptions inside the 20-yard line.