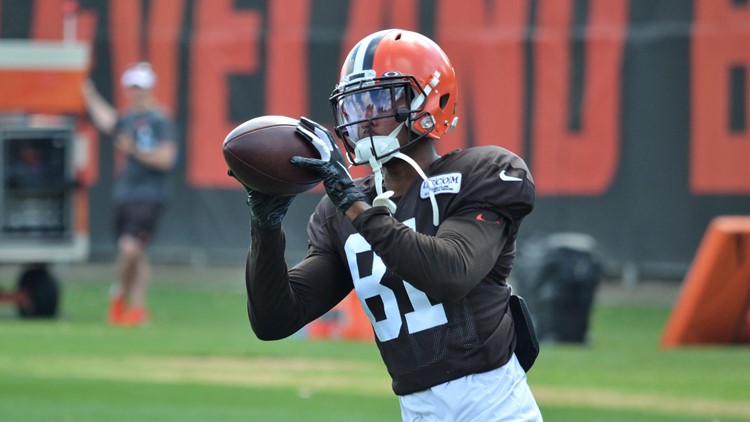 Photo by: Matt Florjancic
Receiver Rashard Higgins looks a pass into his hands during the individual period of Cleveland Browns practice in Berea on Wednesday, Sept. 4, 2019.

BEREA, Ohio — As the Cleveland Browns return to practice in preparation of their matchup on Sunday Night Football vs. the Los Angeles Rams, they'll once again have one of their top pass-catchers on the field.

Moments prior to taking the practice field, Browns head coach Freddie Kitchens revealed that Rashard Higgins will make his return to the team's practice on Wednesday. Higgins, who suffered a knee injury in Cleveland's season-opening loss to the Tennessee Titans, missed the Browns' 23-3 victory over the New York Jets on Monday night.

In addition to Higgins, backup running back and kick returner Dontrell Hilliard will also make his return to practice on Wednesday after missing Monday night's game with a concussion.

But while the Browns' offense will be bolstered by the returns of Higgins and Hilliard, the team will be without at least four starters in practice on Wednesday. According to Kitchens, tight end David Njoku, linebacker Christian Kirksey, right tackle Chris Hubbard, defensive tackle Larry Ogunjobi and safety Morgan Burnett are each expected to miss Wednesday's practice.

Njoku had left Monday night's game after suffering a concussion, while Burnett left the contest with a quad injury. It's unclear what type of injuries Kirksey, Hubbard and Hubbard may have suffered.

RELATED: Is the Cleveland Browns bandwagon already slowing down and losing riders? -- Bud Shaw's You Said It

While it's too early to tell which players will be available on Sunday, any playing time lost by a key contributor could prove significant against a Rams team that represented the NFC in last season's Super Bowl. Entering this week's matchup on Sunday Night Football, Los Angeles lays claim to a 2-0 record with wins over the Carolina Panthers and New Orleans Saints.