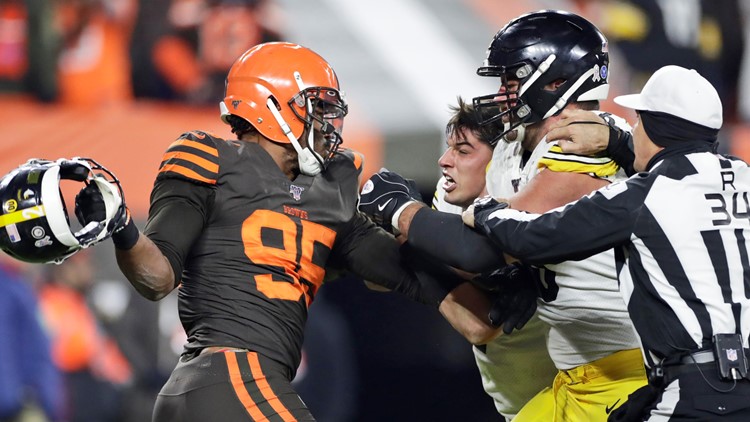 Photo by: Ron Schwane/AP
Cleveland Browns defensive end Myles Garrett, left, gets ready to hit Pittsburgh Steelers quarterback Mason Rudolph, second from left, with a helmet during the second half of a game at FirstEnergy Stadium in Cleveland on Thursday, November 14, 2019.

NEW YORK — Leave it to Saturday Night Live to have one of the funnier takes on the Myles Garrett situation.

Cleveland and the country are still reeling after Garrett hit Steelers quarterback Mason Rudolph over the head with a helmet during the Browns' 21-7 win over Pittsburgh Thursday night. The fight earned the star defensive end a suspension through at least the end of the season.

Last night's SNL was the first show since the brawl, and naturally, the legendary NBC show poked fun at the incident. However, it still came as a bit of a surprise.

Just over six minutes in, Garrett—played by Kenan Thompson—suddenly interrupts the hearing, and a startled Ambassador Marie Yovanovitch describes him as "the guy who hit the other guy with the helmet." The Garrett character, holding a Steelers helmet, opines that he is "tired of being falsely accused."

"You see, what happened was, I saw another player who has lost his helmet somehow, and I thought, 'Oh, he should be wearing a helmet!'" he claims regarding the incident with Rudolph "So I attempted to put it back on his head!"

When told by Schiff he was not on trial, Garrett says he knows, but that President Trump just "pardoned him too for the war crimes," a reference to the real-life Trump reportedly ignoring the Pentagon's advice and pardoning two U.S. Military members who were accused of committing such crimes in Afghanistan. According to Garrett, "[Trump] said I could bring a helmet to Afghanistan and just go nuts!"

Giuliani (played by Kate McKinnon) later returns after poking his eye out with a hammer, causing Garrett to mistake him for a vampire and hit him over the head with the helmet. Giuliani pops back up and quips, "I think he actually might've fixed me."