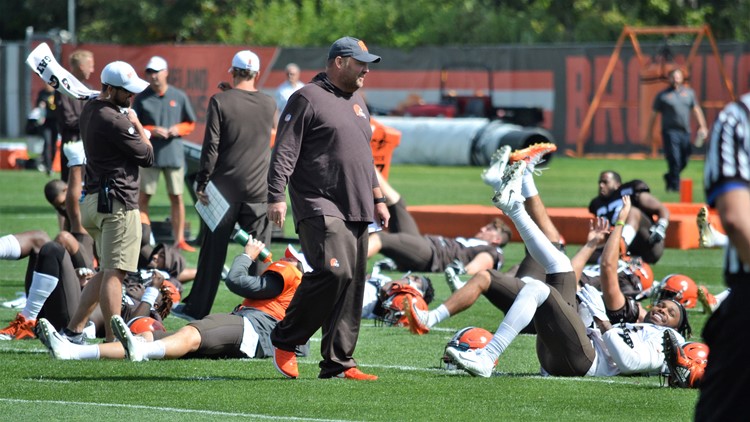 CLEVELAND — There are so many fascinating things to ponder as the Cleveland Browns get ready to meet the Tennessee Titans in Sunday's season opener at FirstEnergy Stadium.

Thankfully, I had a chance to pick the brain of the 'Voice of the Browns' on Wednesday and I think I have a better understanding of the team's mentality heading into kickoff.

Just about every carnival barker nationally that talks down about the Browns believes that their downfall will be that there aren't enough footballs to go around for Baker Mayfield to keep everyone (Odell Beckham Jr., Jarvis Landry, David Njoku, Nick Chubb, etc.) happy.

"The quarterback is in charge," Kosar explained to Jimmy. "It's not a democracy in terms of trying to make people happy, it's almost a dictatorship."

Mayfield knows what he needs to do to make this Browns offense work. He and head coach Freddie Kitchens trust each other. Beckham and Landry have an outstanding rapport with him. It's up to the players to make this work, but Baker has to be the man in charge.

Speaking of Mr. Kitchens, keep in mind that Sunday will be his first regular season game as an NFL head coach. Heck, he's never been a college head coach either.

Kitchens put together an experienced staff of assistant coaches to support him. He's said all the right things in the offseason and has run a disciplined, physical, and efficient training camp. Virtually everyone on the roster is healthy at the outset of the season.

Having said all that, how well will he function in making game-time decisions? Should he punt on 4th and 3? Should he throw the challenge flag? Can he manage the clock with Mayfield in a two-minute drill before the end of a half? It's all that stuff that gets second-guessed by 'Monday Morning Quarterbacks.'

I think he's up to it. But we won't know until the game gets underway.

What to watch for

We've still not seen the Browns offense with all of their weapons loaded for bear. That changes on Sunday.

You might expect that with all of that energy and anticipation, a team might be tempted to attack the defense and go for a bomb early. Jimmy thinks the Browns will look to get everyone involved and try to get the key players touches early. The Browns want to be balanced with Nick Chubb as the stabilizing factor.

You may see the no-huddle on occasion, but Jimmy also cautioned that extensive use of it tends to wear out your defense, because you're asking them to be on the field more than normal. Think about what happened to Kansas City when they played New England in the AFC Championship Game.

Most of all, enjoy this, Browns fans. It's going to be a wild, fun, anxiety-filled, ride this fall. None of us have any idea how it's all going to play out, but you've earned having a team that's enjoyable and relevant.

And maybe, just maybe, a team that will make it to the playoffs.

Watch the Donovan Live Postgame Show, presented by Master Pizza, in the player below:

RELATED: 3 potential problems the Cleveland Browns could face in 2019