Days away from the actually event, we give our latest projection for the 2020 NFL Draft. 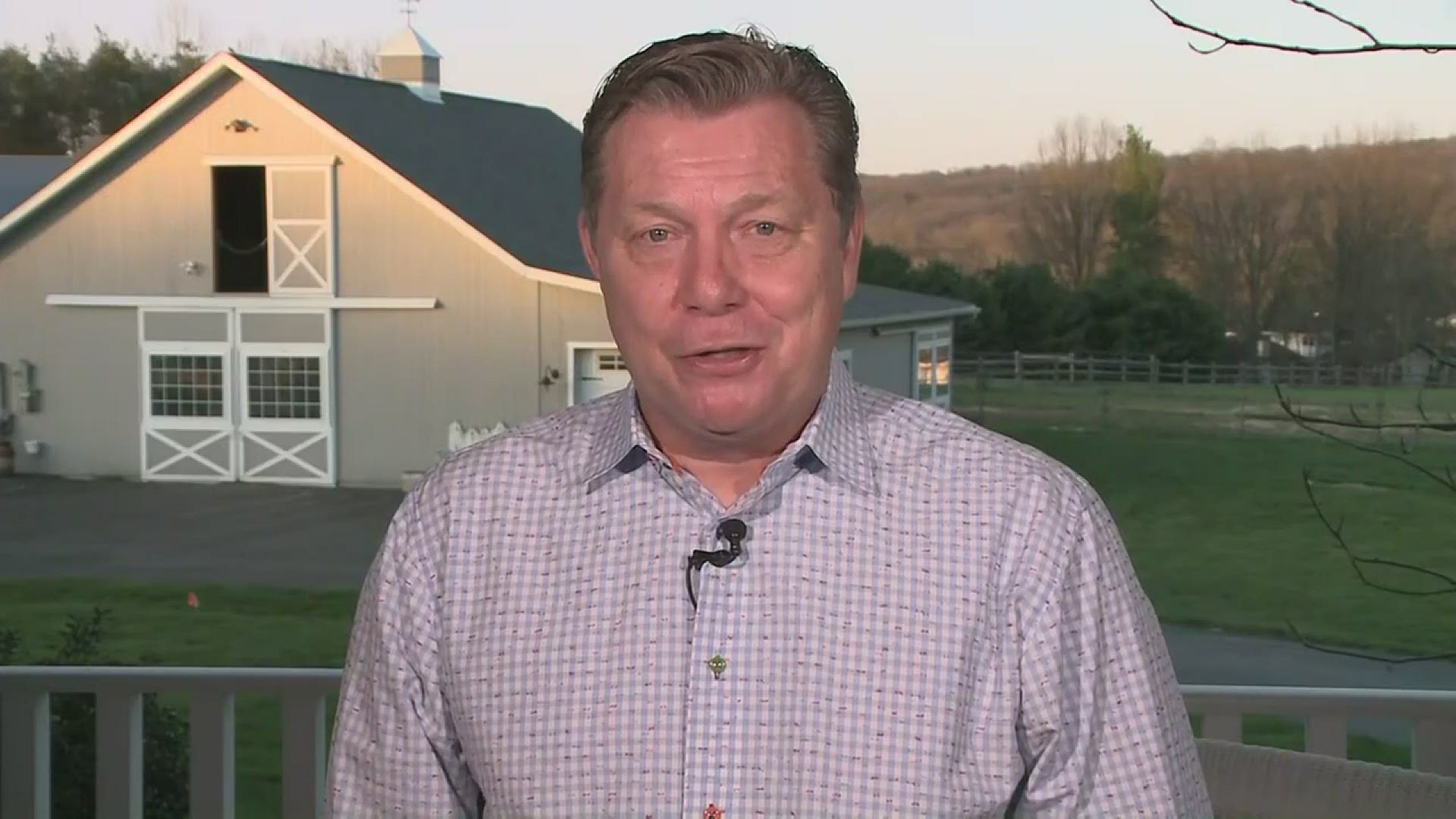 And while the 2020 NFL Draft will look very different from its predecessors, as this year's event will be virtual, the intrigue remains the same.

Who's heading where and what surprises does the league have up its sleeve? We'll find out on Thursday night. Until then, here's our latest -- and final -- mock draft.

Dating back to his Heisman Trophy-winning season in 2019, Joe Burrow has been favored to be the No. 1 overall pick and there's no reason to think anything has happened in the past few weeks to change that. Looking to secure a franchise quarterback, Cincinnati selects the Athens, Ohio, native.

Like Burrow to the Bengals, it seems like a homecoming for Washington D.C. native Chase Young has been in the works since the draft order was set. On Thursday, it should finally come to fruition.

The Lions' needs are so vast that there are a number of prospects who could be in play. With Ohio State's Jeff Okudah, Detroit could not only fill one of its biggest needs, but also nab the best player available.

The Giants need an offensive tackle but the deep nature of the position in this year's class could allow New York to wait. Taking Isaiah Simmons is the type of big swing Giants GM Dave Gettleman has shown he's not afraid to make while picking toward the top of the draft.

There's been some buzz about Tua Tagovailoa falling in recent weeks, but I'm not buying it. Dating back to last offseason, the Dolphins have been attached to the Alabama quarterback, who I think they'd gladly be willing to take despite his injury concerns.

I don't buy that the Chargers are actually going to enter the 2020 season with Tyrod Taylor as their starting quarterback. And while they could always still sign Cam Newton or Jameis Winston, Justin Herbert possesses the potential to be a more suitable long-term solution.

Appearing to be headed into a rebuild, it would make sense for the Panthers to pick the best player available. In this case, that happens to be Auburn's Derrick Brown, who could take over as the focal point of Carolina's defense following Luke Kuechly's retirement.

The Cardinals have gotten Kyler Murray weapons; now they need to protect him. While most of this year's deep offensive tackle class has been lumped together, Jedrick Wills Jr. seems to have slightly separated himself as the top prospect.

While the Jaguars' receiving corps is solid -- even after releasing Marqise Lee -- it lacks a No. 1 option. Oklahoma's CeeDee Lamb would provide Jacksonville with just that.

Barring a trade for Trent Williams, the Browns' need at left tackle remains too big to ignore. Tristan Wirfs could give Cleveland the best combination of a high floor to fill the need and high ceiling to potentially raise the talent level of its roster.

Despite their glaring need at wide receiver, Jets GM -- and former offensive lineman -- Joe Douglas seems intent on building his roster from the inside out. And Georgia's Andrew Thomas may be the most NFL-ready offensive tackle in the draft.

With the first of their two first-round picks, the Raiders will likely go either wide receiver or cornerback. Should Jerry Jeudy be available, it would likely make their decision easier, as the Alabama product could give them the top of offensive target they've been lacking since trading Amari Cooper.

Considering the NFL's affinity for speed, I wouldn't be surprised to see a team jump up in the draft to select Henry Ruggs III. But if he's still available, the Alabama speedster would make for a more than intriguing fit alongside Deebo Samuel in Kyle Shanahan's offense.

Mekhi Becton might be the most physically gifted offensive lineman in this year's class (see: 5.1 40-yard dash at 357 pounds), but a reported failed drug test could negatively affect his stock. Nevertheless, Tampa Bay's need at the position is so great that it would likely jump at the chance to add an offensive tackle as talented as Becton.

Now that they've committed to Drew Lock, the Broncos need to get their second-year signal-caller some more weapons. LSU speedster Justin Jefferson fits the bill and makes for an ideal fit across from 6-foot-4 Courtland Sutton.

Pass-rusher isn't the Falcon's biggest need, but it's also a position you can never have too much of. And Atlanta would find itself fortunate to come to the podium with the second-best pass-rusher in the draft, K'Lavon Chaisson, still available.

Like the Falcons, the Cowboys are in a position where they'll likely be looking to upgrade the overall talent of their defense. The best cornerback in the draft not named Jeff Okudah, C.J. Henderson would help them do that, while filling the void left by Byron Jones' departure in free agency.

After getting their own quarterback earlier in the draft, Miami now must find a way to get to opposing signal-callers. Javon Kinlaw could help the Dolphins defense do just that, as the South Carolina product possesses the type of versatility that could thrive under Brian Flores.

Should they first opt for a wide receiver, the Raiders will likely be in the market for a cornerback at No. 19. And considering they selected three players out of Clemson last season, it wouldn't be a surprise to see that player be A.J. Terrell.

After taking a wide receiver at No. 9, it makes sense for Jacksonville to turn its attention to defense at 20. And considering how unlikely it is that Yannick Ngakoue will be back in 2020, it makes sense for the Jaguars to add an edge rusher like Yetur Gross-Matos, who tallied 34.5 tackles for a loss and 17 sacks in the past two seasons at Penn State.

Given the depth in this year's class, the Eagles should be in the market for the best wide receiver available. In this case, that happens to be Tee Higgins, who would give Carson Wentz the type of high upside wideout target he currently lacks.

Using the pick they acquired from the Buffalo Bills in the Stefon Diggs trade, the Vikings replace their former star wide receiver with Brandon Aiyuk, whose deep threat ability should fit in nicely opposite Adam Thielen.

While Isaiah Simmons might have the highest upside, one could argue that Oklahoma's Kenneth Murray is the most complete linebacker in the draft. Given their need at the position, the Patriots would be fortunate for him to still be available when it's time to make their pick at No. 23.

Drew Brees is back, but likely not for long. Should he still be available, Jordan Love could immediately fill the void Teddy Bridgewater left at backup quarterback, while also giving New Orleans its succession plan to the Brees era

This is a pick that almost seems too good to be true. Addressing a glaring hole in the secondary, Minnesota adds the son of a Vikings great in Antoine Winfield Jr., who also happened to spend his college career in the Twin Cities.

There's been some buzz about the Dolphins taking an offensive tackle with their first pick -- or even trading up -- but I'm not buying it. Instead, it makes more sense for them to find a value like Josh Jones, who was one of the standout performers at this year's Senior Bowl.

Capable in both coverage and run support, Xavier McKinney is arguably the most complete safety in the draft. Despite its pass-rush and offensive line concerns, Seattle would likely jump at the opportunity to add a playmaker of McKinney's caliber to the back end of its defense.

Over the course of this offseason, the Ravens have made a concerted effort to improve their defense. LSU's Patrick Queen possesses the potential to fill the void left by C.J. Mosley's free agency departure a year ago.

After re-signing Dennis Kelly, the Titans don't have to immediately replace Jack Conklin at right tackle. Instead, they can focus on shoring up their secondary with a high upside cornerback like Jeff Gladney.

The Packers have Davante Adams, but not much else at the wide receiver position. Adding Denzel Mims would give Aaron Rodgers another weapon, while also alleviating pressure from the team's top target.

A former 5-star prospect, A.J. Epenesa's versatility and talent could shine playing alongside Nick Bosa and Arik Armstead on a 49ers defensive line that lost DeForest Buckner this offseason.

Kansas City has shown that it operates best with a running back by committee. J.K. Dobbins would not only fit in nicely with Damien Williams, but possesses the type of speed that could make an already explosive Chiefs offense even more dangerous.

RELATED: 2020 NFL Draft: 5 non-offensive linemen the Browns could take in 1st round