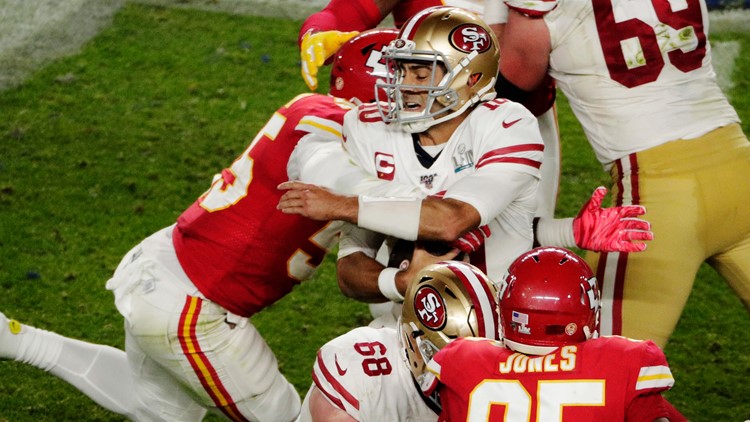 CLEVELAND — Frank Clark and the Kansas City Chiefs picked a heck of a time to get their first sack against San Francisco 49ers quarterback Jimmy Garoppolo in Super Bowl LIV.

After getting close to sacking the NFC Champion quarterback numerous times throughout the game, the Chiefs were able to get home on Garoppolo for a nine-yard loss on fourth down on San Francisco’s third-to-last drive of the game.

Clark’s sack generated a turnover on downs and set up running back Damien Williams for a 38-yard touchdown run, which gave the Chiefs a 31-20 lead over the 49ers with 1:12 to play in the fourth quarter of play at Hard Rock Stadium in Miami Gardens, Florida Sunday night.

“I always knew that Frank was a different guy,” Ted Ginn Sr., Clark’s high school coach, said to 3News earlier this week. “He was very athletic, very explosive. He’s the same guy that I saw when he was younger, so I’m not surprised with where he’s at, being one of the top pass rushers and defensive ends in the NFL.”

The Seattle Seahawks traded Clark to the Chiefs two days before the 2019 NFL Draft, and he proved to be a key pass rusher for Kansas City’s defense throughout the season.

Clark registered eight sacks during the regular season and had another five during Kansas City’s three postseason games, including the one that helped clinch the Chiefs’ first Super Bowl Championship in 50 years.

“I think Frank is a freak with what he can do at defensive end,” Ginn Sr. said. “When he was in high school, I used to always get on him and we’d say, ‘Frank, we can’t run this scheme right because you keep breaking the scheme.’

“But Frank was always that type of guy that knew how to come off his hand quickly. He could jump inside, and then, jump back outside and still make a play. Even though it might look like it’s the wrong technique, he was just a super-freak. I’ve been seeing that ever since he was a kid.”