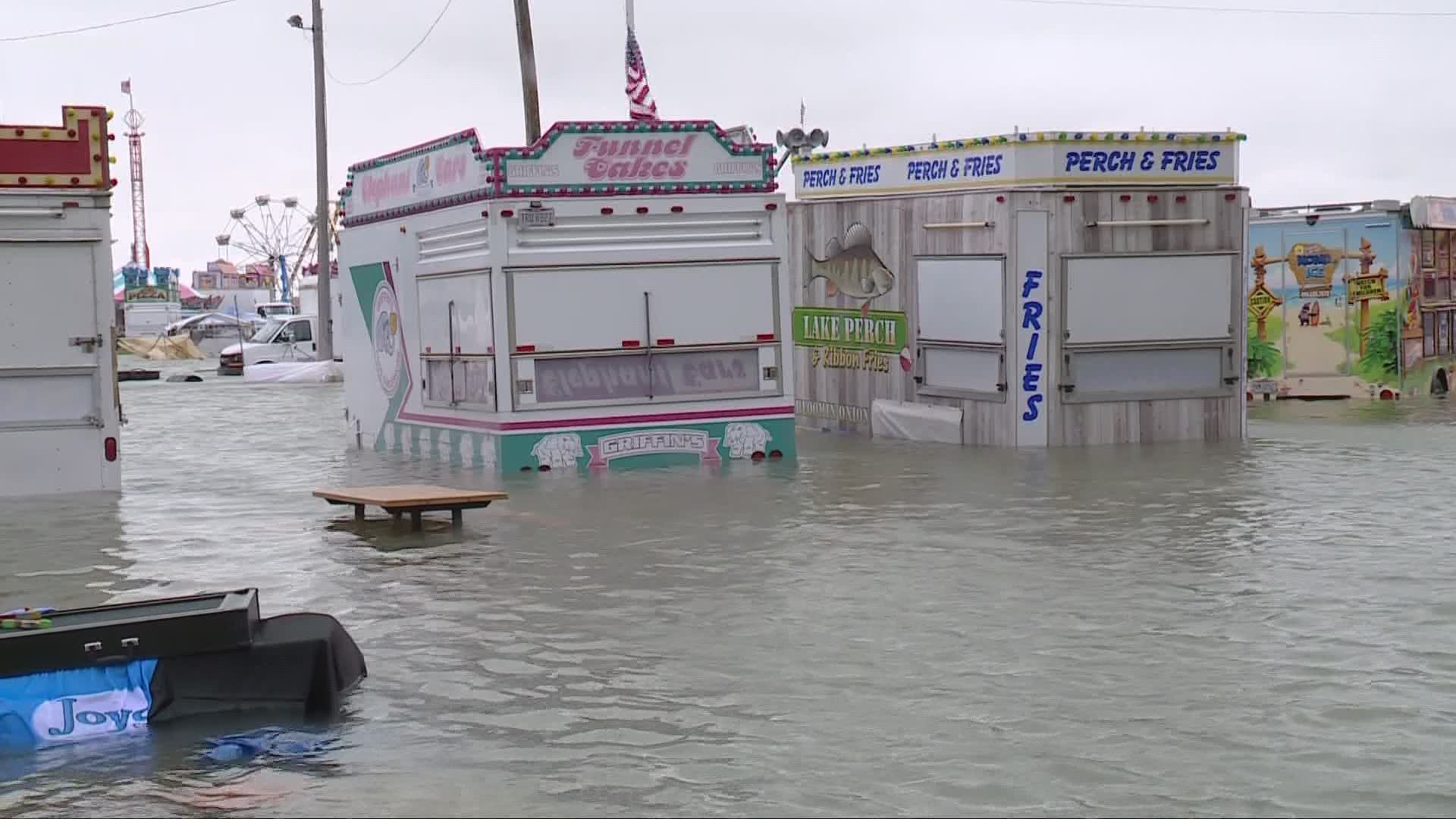 PUT-IN-BAY, Ohio — Friday's rain and strong wind are prompting closures, road detours and lack of ferry service as flooding and pounding waves hit the Lake Erie region. Put-in-Bay police reported that an officer on the island rescued a family stranded in a flooded vehicle. In addition, Port Clinton entered into a state of emergency and Toledo closed Cullen Park and floodgates.

As of 1 p.m., ferry services were suspended, Cedar Point closed early and the grounds of Perry's Monument were flooded and closed. Detours were established around 12:30 p.m. for several flooded roads in Ottawa County.

Kelleys Island police said that first responders on the Lake Erie island aided more than a dozen people affected by the flooding.

A social media post from the department praised police, fire and EMS personnel "for the outstanding job they did evacuating and rescuing approximately 15 resident/visitors today from the high water levels. Our first responders always working together to get the job done and make sure our residents/visitors are safe on Kelleys Island."

MARBLEHEAD EROSION ON THE LAKESHORE

Port Clinton police and fire officials said at 2:45 p.m. Friday that the Walleye Festival parade set for Saturday would be canceled and they said, "we'll see about Sunday."

Festival organizers said they are waiting to make a call on whether the festival itself will go forward until they evaluate the situation Saturday morning. The city of Port Clinton is under a state of emergency until further notice.

The kickoff of Meals and Music on Madison (MOM) for Friday night was canceled.

The city of Toledo issued an advisory for Point Place residents around 2:05 p.m. Friday in light of the flooding as strong winds and rain remain a concern in the area.

The departments of Sewer and Streets are monitoring developments.  To report flooding concerns, call Engage Toledo at 419-936-2020.

The city said floodgates are installed and closed and additional pumps are installed and working where needed. Cullen Park is closed to the public effective immediately. "While there is no current concern for the levees to breach, they also are being closely monitor(ed)," a statement from the city said. "Please do not drive or walk through areas of standing water. That is unsafe."

Lake Erie water levels at the mouth of the Maumee River have risen over 3 feet since this morning, due to a strong and persistent northeast wind.

Credit: WTOL 11
A city of Toledo crew bring a pump to bail out part of Edgewater Drive in Point Place.

The city of Port Clinton is under a state of emergency Friday due to lakeshore flooding. The emergency was declared just after 1:30 p.m.

The entire city is under the state of emergency, which is in effect until further notice.

"Many roads are impassable due to high water, downed trees and power lines. All vehicles are asked to stay off the streets until the State of Emergency has been lifted," the advisory said.

Pedestrians are advised to use cautions as manhole covers and catch basins are coming loose throughout the community and could cause injury.

Credit: WTOL 11
Preparations for the weekend's Walleye Festival in Port Clinton were left a mess by Friday's flooding.

Credit: WTOL 11
Preparations for the weekend's Walleye Festival in Port Clinton were left a mess by Friday's flooding.

Put-in-Bay police gave a shoutout to an officer whose quick thinking kept a family out of danger on the island Friday.

According to police, Officer Tyrone Sanders helped to get a family of six out of their flooded vehicle. The family's truck became stuck in front Perry's Victory and International Peace Memorial.

People on the island are advised to of Bayview Avenue as it is flooded in multiple spots.

"Our Fire Department reports water as high as 40" near Perry's Monument," the department's Facebook post read. "DO NOT TRY TO DRIVE THROUGH HIGH WATER."

Put-in-Bay Volunteer Fire Department urged those on the island to avoid areas near the flooded Perry's Victory and International Peace Memorial due to potential electrocution risk.

"The water is extremely high and there is a submerged electrical box by the monument," the department's Facebook post said at 1:30 p.m. "While the box is insulated and waterproof there is still the risk of electrocution entering the water. Avoid these areas at all cost. If there is an emergency please call 911 and we will do what we can to get to you."

Credit: Put in Bay Volunteer Fire Department
People on Put in Bay are advised to avoid the area near Perry's Monument due to flooding.

Credit: Put in Bay Volunteer Fire Department
People on Put in Bay are advised to avoid the area near Perry's Monument due to flooding.

High water has also been reported on county and township roads in the general vicinity as well.

The highway patrol is requesting that anyone traveling AVOID this area altogether until further notice.

Put-in-Bay businesses have been gearing up for a big Memorial Day weekend, but rain and wind are complicating plans for many hoping to visit the island.

Kelleys Island Ferry announced Thursday it will not be running Friday or Saturday. They hope to return to service by Sunday.

Jet Express initially planned to run Friday, but announced in the morning all trips were canceled. Jet Express will reevaluate its schedule Saturday at 7 a.m.

Miller Ferry suspended all trips Friday morning are "not hopeful" to resume until Saturday at the earliest.

All three are telling guests to monitor their Facebook pages, as linked above, for updates.

Due to the wind, rain, and waves the grounds were flooded at the Perry's Victory and International Peace Memorial at Put-in-Bay. The visitor center and all visitor services closed for the remainder of the day Friday.

Due to the wind, rain, and waves the grounds are flooded. The visitor center and all visitor services are closed for the remainder of the day. Stay safe out there. pic.twitter.com/OtYyigiJSG

Cedar Point will close early Friday - at 2 p.m. - due to the weather conditions. Prior to the announcement, the Sandusky amusement park was operating at a limited capacity, without roller coasters running and with the Frontier Festival on a limited operating schedule.

Due to weather conditions, Cedar Point will close at 2:00 p.m. today, May 28. pic.twitter.com/xYSl6uJjZf

Some situations were a little more lighthearted. Around 5:30 p.m., a carp rescue began in a Point Place neighborhood. Three buckets of carp were saved from Shoreland Avenue by neighbors and returned to their natural habitat, which we're told is not the middle of a roadway.

PORT CLINTON FIRE DEPARTMENT GOES ABOVE AND BEYOND

What a day! A big thank you to the Port Clinton Fire Department for keeping us safe and dry. It helped us do our job to keep you all of you informed and safe too pic.twitter.com/fpuKCb7MTs