The mother of a 16-year-old Euclid girl was unaware of police video of her daughter's encounter with a controversial police officer until she saw it on WKYC.com. 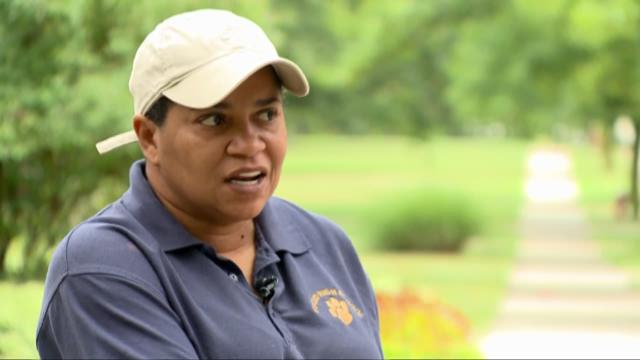 The mother of a 16-year-old Euclid girl was unaware of police video of her daughter's encounter with a controversial police officer until she saw it on WKYC.com.

"I think it was harsh. I thought the take downs and aggression was harsh," Padgett said.

Officer Amiott reported that the teenage girl was trying to enter the Euclid library about an hour before kids are allowed in without an adult. But Padgett says her daughter was reaching out to Amiott who was inside the main entrance. She explained that her daughter wanted the officer to stop an aggressive boy from hurting her.

"She said he was like choking her. They were horsing around at first but it got too serious for her. At that moment, she walked in to get help but he (Amiott) never helped her," Padgett said.

Padgett says her daughter was with her 6-year-old niece and wasn't looking for trouble. But she used profanity when the officer grabbed her by the arm and took her inside to make a report. Amiott handcuffed her and threw her down to the ground twice and placed his knee in her back. Padgett, an employee of the public schools in Euclid, is around kids most of the day. She believes Amiott could have prevented the situation from escalating.

"A lot of situations could be diffused if they just listen. Nobody wants to listen. They're always in attack mode," she said.

Officer Amiott is serving a 15-day suspension resulting from a violent confrontation he had with Richard Hubbard and could not be reached for comment.