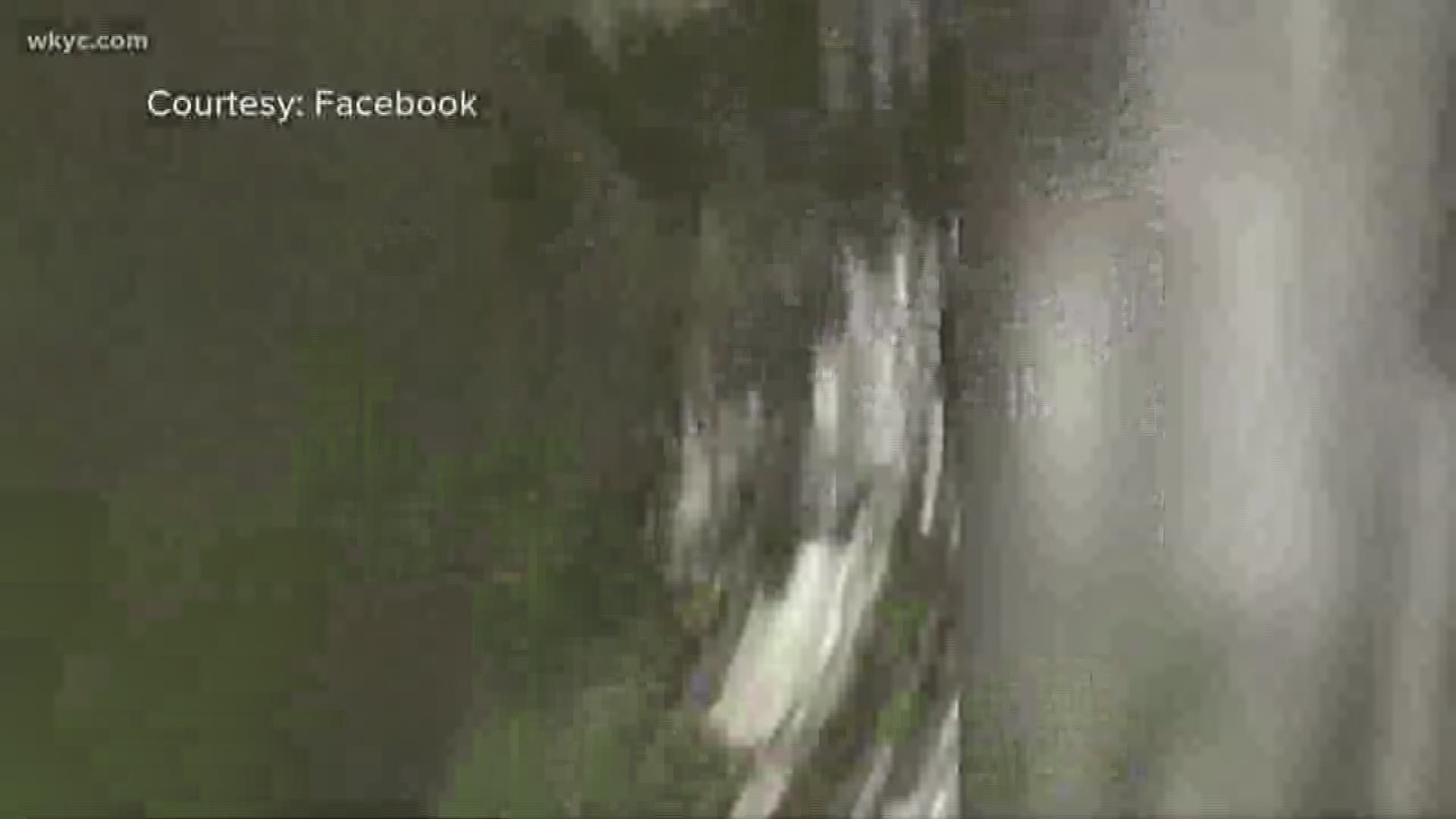 The National Weather Service was quick to survey storm damage in Trumbull County Tuesday, determining that an E-F 1 Tornado touched down around 10:30 am.

It was weak by tornado standards, but it could have been deadly since it appeared to come out of nowhere.

The only alerts that showed up on people's phones were for thunderstorms…not tornadoes. And some residents say the wind was so strong they didn't hear the tornado sirens. But one Cortland man who was standing outside before it hit, saw something that told him he needed to start recording what was coming his way.

"That's a tornado bro!” yelled someone in a video that Joshua Lee Nelson posted on Facebook.

And unless you’re a storm chaser, it doesn't get much better than that. But about a minute and thirty seconds into the video, which shows a waterspout over the Mosquito Reservoir in Cortland, you can hear the panic in their voices as they ran for cover.

It was just moments later that the tornado, which was headed out of Mecca, touched down. And when it was done, Joshua began recording the damage which tore through his neighborhood.

I asked him what possessed him to take out his phone instead of running for shelter. He replied, “It's kind of a once in a lifetime opportunity. So, whenever you see a tornado forming in front of your face you don't really want to take off too soon."

The Morris's, who live across the road on Market Street, just East of where the water spout was spotted, say they didn't know what hit them.

"I heard a big gust of wind and the power went off. So, I looked out window to see if line had fell,” Sierra Morris told me.

But it was worse than a downed line. Her husband David said, “My wife came running into the room yelling, saying a tree had fallen on our car."

It dented the trunk. But the car next to them had the back window smashed out.

Cara McDowell who works in Cortland, was also blindsided. She said she heard what sounded like the rumbling of wind.  But when she looked out her window, the trees weren’t moving. Seconds later, she saw a white funnel cloud whip by her office, snapping trees and flattening a maintenance garage.

And there was similar damage near Housel Craft road in Bazetta Township, on the west side of the lake. We watched as crews worked to restore power to some 72 residents who ended up in the dark from downed power lines.

Gary Garnet of the National Weather Service, who was in the area assessing the damage called the storm very unusual, saying “This is only the 7th recorded Tornado that we know in January in the state of Ohio, since we've been keeping records."

In fact, the NWS radar only picked up thunderstorms, which was why there was no Tornado alert issued.

He described it as a "Very small, marginal thunder storm with no real signs that it was going to become tornadic," he told us.

Police say they only realized a tornado touched down, after receiving a 911 call about a funnel cloud.

We’re told no one was injured. And it was quite the thrill for people who had never seen something like this before. But, after the storm moved out and Joshua was safe in his home you can hear someone in his video saying, "I need a cigarette."

While the main storm system came and went in less than ten minutes, there were thunderstorms, and lightening on and off all afternoon. Even hail. But the National Weather Service says we should be safe from any tornadoes…for now.

Although no one was expecting this one either.