Watch again: Gov. Mike DeWine holds briefing with the latest on the state's response to COVID-19

DeWine announced that students K-12 will be required to wear masks in school. Plus, Dr. Amy Acton is leaving state employment. 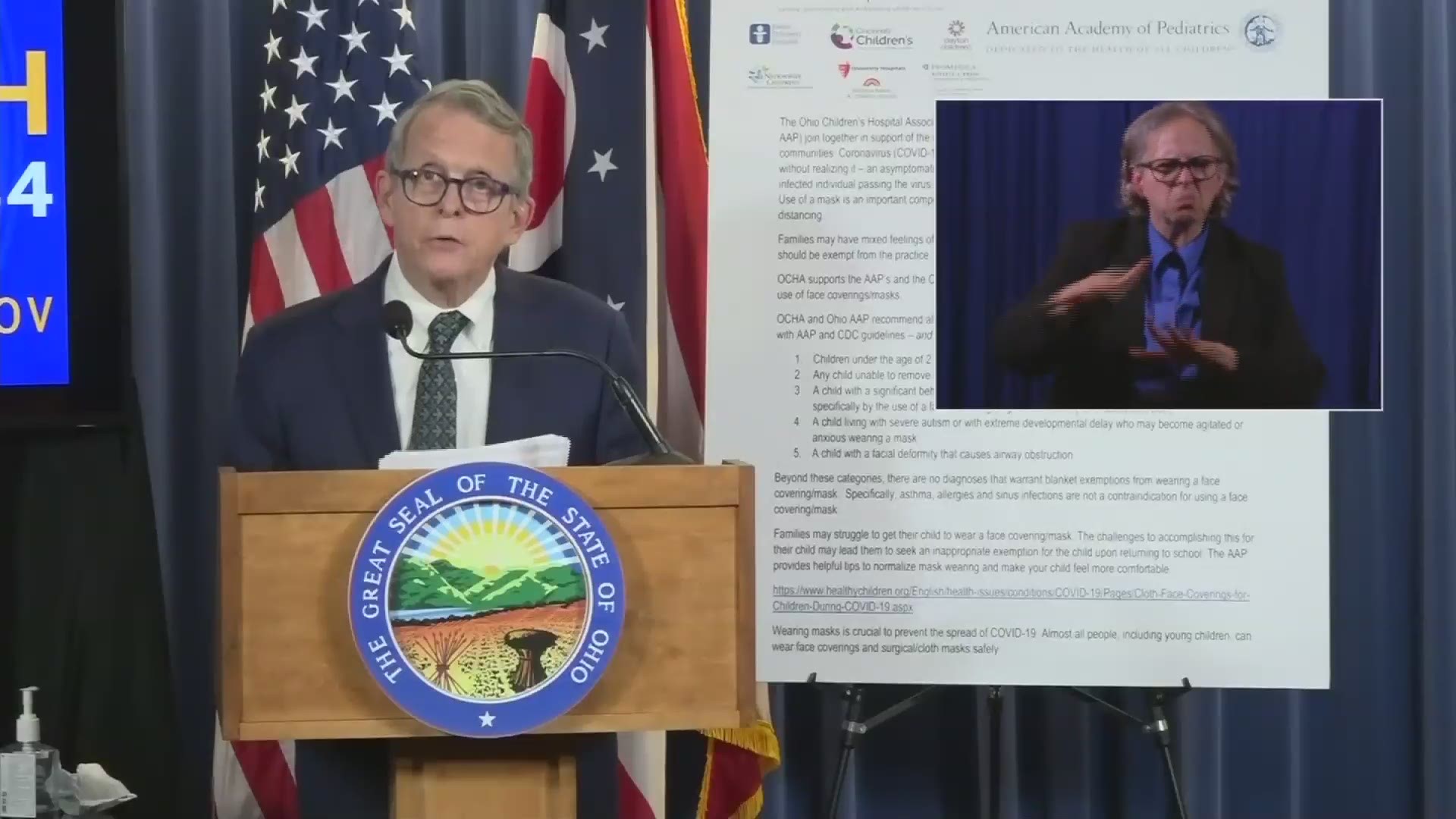 COLUMBUS, Ohio — Governor Mike DeWine and Lt. Gov. Jon Husted held a briefing on the state's response to the coronavirus (COVID-19) pandemic on Tuesday at the Ohio Statehouse.

Among the topics DeWine addressed during Tuesday's press conference:

Exceptions to the rule include children who are unable to remove the face covering without assistance, a child who has a behavoral or psychological condition that is exacerbated by wearing a mask, children with severe autism, and children with severe facial deformity that causes airway obstruction.

DeWine announced that former Ohio Department of Health director Dr. Amy Acton is leaving state employment to return to the Columbus Foundation, where she worked before being tapped to join the governor's administration.

"While it saddens me that she will be leaving my office, she has assured me that she is just a phone call away and will be available to continuing advising us as we move through this pandemic," DeWine said.

Acton was one of the most visible people in the state during its inital response to COVID-19. As pressure mounted during Ohio's lockdown and as lawsuits were filed, she stepped down as ODH director in June to take a role as DeWine's health advisor.

One year after the mass shooting in Dayton, DeWine has called on the state's general assembly to advance the Strong Ohio gun legislation. With Ohio's gun laws having remained the same since, DeWine opened his press briefing by calling on the Ohio general assembly to advance the bill that was introduced last October. According to DeWine, the Strong Ohio bill is designed to protect citizens from gun violence while also protecting the rights of Ohio’s law-abiding citizens.

Husted said that the Cleveland Browns and Cincinnati Bengals have each submitted plans for hosting fans and that those proposals are currently under review.

Husted's comments come three days after the Ohio Department of Health extended an order relating to regulations for athletic competitions. Included in the order is a guideline prohibiting spectators from attending competitions for contact sports, including football.

But while the ODH's order is currently in effect until further notice, Ohio Governor Mike DeWine and Husted each indicated on Tuesday that it isn't the order the state plans on keeping in effect for the start of the fall sports season. Rather, the state is still in the process of adjusting its protocols and gathering information before implementing a new order relating to sports.